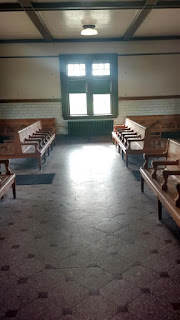 FF- Friday Fictioneers
© J. Hardy Carroll
It seemed too good to be true.  A man named Kropotkin had invented a device for bending at the waist, lowering your rear end downward, and resting it on a flat surface!
What a boon to humankind!  No longer having to lie down whenever you became tired of standing. They called it "Kropotkin's Chair."  I have no idea what the word chair meant.

I was invited into the Hall of Chairs to try out the incredible device.  Over 20 of us sat down, as they called it.

Suddenly Kropotkin burst into the room. “Get up, everyone, we’ve discovered something terrible!”


“Once you have a chair, there’s a horrible thing that follows called a job!”

How many of you remember the initial experiments with chairs?  Unfortunately they were not able to separate jobs from chairs, so there you are right now, closing the books on sales of toilet seats for May instead of lying down.

Perhaps the takes of the other Friday Fictioneers on the picture prompt above will be more positive.

On the other hand, speaking of toilet seats, without Kropotkin we wouldn't have them either!

I have to say that was a blow to progress... I hate Kropotkin... what's wrong with recliners.

And it will get worse still when desks get invented. You're quite mad, Perry. But I like that in a man.

Recliner? What's that? We've only just invented the chair.

I'm glad you like it, Sandra. If only a woman on this side of the ocean did.

Personally, I prefer the hammock! :)

Hilarious, Perry. How quickly the idea spread. Squatting became practically obsolete. The invention of work which followed was unfortunate. It's having a serious effect on our health. Well done. :D --- Suzanne

Job is related to that four-letter word I hate known as WORK.

My dad used to milk cows on a three-legged Kropotkin, which as I recall was invented by Dr. Kropotkin's smarter brother, Earl.

The family would have been fondly remembered by history had it not been for that whole job/work thing.

I always preferred lieing down. I knew I was doing something right...

Okay, I'll get busy inventing one.

Thanks, Suzanne! I'm going to try to get you one of them newfangled chairs and detach the job part first.

Yeah, if only Earl had been in charge of the chair and his idiot brother the three-legged Kropotkin. What a better world!

Me too. Kropotkin did us no favors!

You mean if we can get rid of chairs, we can do away with jobs, too?! Let's get on this right way. Or, I vote for recliners. Very funny, you are.

I vote for recliners with electric massagers. Or human massagers, but I'd get some guy named Bruno.

it's what maybe called sitting on the job. :)

Thanks, Perry. I'm retired. The only work I do now is writing. I could do that in a lounge chair, though. That would be great. :D ---- Suzanne

And now we can, instead of lying down on it.

Cursed chairs! I think I prefer to go back to lying down! ;-)