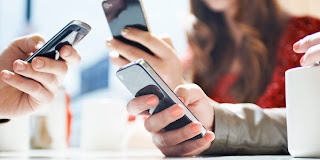 Until not that very long ago, I was still stupid about smart phones.

It's not that I'm a Luddite or otherwise particularly behind the times, it's just that I was waiting until we had cars that drive themselves before I got myself a phone that did anything more than ring up Ol’ Doc Johnson because Little Timmy was sick and Lassie was missing.

But with the advent of cars so advanced that not only can they drive themselves they can also stop and ask directions and then get the directions screwed up, it was time for me to step up to a stepped-up phone.

It was time for iPhone for mePhone.

But I swore that in so doing I would not fall prey to the custom most foul practiced by smart phone owners around the world.  I would not spend the rest of my life with my head tilted downward, my eyes riveted upon the phone, and my psyche oblivious to the rest of the Milky Way around me.

For one thing, it's rude. These days you can meet someone on the street, talk for five minutes, and not even know who you were talking to. You may not even know whether the person was wearing pants.  And even worse, it isn't safe. With eyes locked onto the screen 24/7 you risk all kinds of mishaps from bumping into one another (especially unpleasant if neither of you are wearing pants), to walking down an open manhole, to striding into the Pacific Ocean until you trip over the International Date Line.

So when I got my iPhone, I took it in hand and walked proudly forward out of the Verizon store, my head held high, my eyes gazing straight ahead, and my life firmly rooted in reality.

How did I manage to do this?

Simple.  I'm a loser who doesn't get any e-mails or texts.

I'm not in business anymore so there's no e-mails from bosses, co-workers, or anyone who wants me to do anything more than get out of bed occasionally. My circle of acquaintances and friends having shrunk like a linen jacket in the dryer, I get texts from Verizon about my overdue bill, friends who think they might have left gloves at my house six months ago, and elderly Uncle Ted who is experimenting with texting and didn't mean to text me, which is okay because I don't have an Uncle Ted.

And as I walk around fully perceiving and totally in touch with my environment, all around me are the cool people enmeshed into their smart phones, studying their screens as though they are little slot machines constantly coming up with three cherries.

Where are all the Nigerian princes when you need them?

That’s it.  Getting there.

And subscribe to internet journalism in the form of esteemed sites like TruthRipper, FactForker, and BuzzKill, as well as the dating site JuicyJews.com.  And subscribe to The Ballsy Boomer about aging in place, that place being a strip joint near Schwenksville PA.  And start sending out texts to folks I barely know, including Uncle Ted whom I probably know better than all the rest of them.

And now with head held low and eyes straight downward, I daily risk mortal injury in the form of walking into a revolving door and going around forever in four neatly sectioned pieces.

So, looks like I'm still stupid about smart phones.