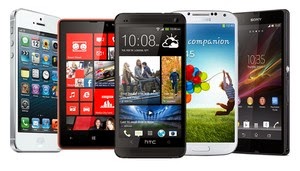 Know what? I have no idea what these are.

It happens more and more all the time, someone expressing shock and consternation at my most grievous failing as a human being.

"Why didn't you just pick it up on your smart phone?"

"How do you get your messages, idiot?  By Harry Potter's owl?!"

Yes, it's 2014 and I am still stupid about smart phones.  I have myself a regular dumb ass phone such as you had 5 or 6 years ago.  When someone calls me, my cell phone rings: "Yup, Yup, Yup, Yup, Yup!"  Access the internet?  It barely accesses the person I'm calling.  Touch screen?  If I tried to touch it, it would probably slap me!

It doesn't seem so long ago that I first spotted people on the street walking about with phones without wires held tightly to their ears.  I remember thinking:

"Wow, they must be really important!"

Back then a cell phone was the size of a grandfather clock with an antenna.  Many people carried their cell phones in holsters at the waist which made them look like wannabe lawmen in the Old West. I was always tempted to shout "Draw, Cowpoke" whenever somebody's phone went off in my presence.

And then I too joined the Wannabe Lawmen of America, and got myself a cell phone.

Service was often sporadic in those days and sometimes you'd get so sick of saying "excuse me, could you repeat that?" that you'd fill in the meaning of inaudible words  through the magic of context.  It could be risky. Make a poor interpretative choice and you might wind up engaged to a blood relative, accepting a mining job in a small mid western town,  or signing on to become a rabbi. There were also areas known as dead zones, in such case the term  having nothing to do with my social life.

Gradually cell phones evolved.  They developed better graphics, became reliable enough that few outside the Ozarks married their cousins, and eliminated the need for a holster by becoming small enough you could almost swallow them.  Now wherever you went you could readily receive crystal clear phone calls from annoying people you could heretofore easily have ducked.

Then phones took the great leap forward.  They became smart.

So smart they were now way smarter than you and I, especially at subjects that require math.  Cell phones acquired cool new names like the I-Phone, the Android, and the Agnes R. Brockelman and featured a host of new functions like navigation systems, media players, and the ability to turn the lights off in your bathroom when you are in Europe, not that you ever get to Europe.  They all had touchscreens, navigated the web, and came on to your girlfriend when you were not around.

Yesterday it was an attractive young woman on a bus who noticed my grievous lack of compliance with the nature of the times.

"Excuse me, sir, but you have a non-smart phone, don't you?"

Here we go again, I thought.

"So you don't feel the need to keep up on your latest e-mails until you can get to a PC?"

"And you don't care about doing your wash remotely,  corresponding with alien life forms, or time travel to the Coolidge Administration ?"

"Wow, you must be really important!
Wanna hang out?"

Maybe I'm not so stupid about smart phones after all.

Wow, not carrying a smart phone is a turn-out for cute young women. How cool is that? You're the hippest of the hipsters after all.

Hmmm, maybe that's why hubby hangs onto the old flip phone. ROFL at the size of a grandfather clock. I HAD that phone! It's a good thing car consoles were bigger at that time.

Well, that's the point I was trying to make, that carrying a dumb phone is the new smart phone, but I'm not sure it came out so well. I think I'm gonna haul this post into the shop and do a little repair work when I have the time. I'm just too busy with the dumb phone worshiping hot women right now.

Yeah, Patti, we forget how big those old phones were but all you have to do is catch an episode of Seinfeld. Remember when people wore their cell phones at their waists in holsters and it looked like the Wild West?l As for your husband, tell him to stop working my angle!