The Storm That Was What It Was 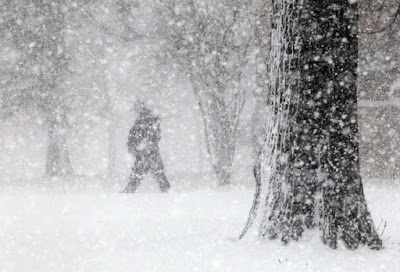 After a full day and a half of experiencing Nature’s wintry frenzy, what some people had been touting as the Storm of the Century is now ended.  Much of the East Coast is covered in thick billowing blankets of snow, and as I look out my window I’m seeing almost as much white as when I looked over the recently announced Academy Award nominations.

Clearly it was premature to call anything falling from the sky here in year 2016 the Storm of the Century. We’ve got 84 years to disprove the assertion! In a couple dozen years we might be having storms that make this one look like little more than a malfunction in your frost free freezer.  Perhaps we’ll be having regular Sharknados by then.

You won’t even be able to sled in them!

I also understand that people names are now bestowed upon snowstorms just like they are on hurricanes, and this past storm was named Jonas. But does anyone go to the trouble to coordinate the personal name of a snowstorm with its title? Otherwise we may well wind up with a Storm of the Century named Floyd or a poopy little snow squall called Angelique.

Before some misbegotten and misguided meteorological panel bungles the title of the next highly touted storm, here’s a few better suggestions for the one just past:

Well, it’s time to go shovel now.  Look at those mounds of snow every bit as massive as Chris Christie’s old body! And it’s so cold out here, almost as frigid as Martha Stewart caught off guard.

I can’t even see my car, it’s totally buried. By the time I dig it out it will be time to trade it in. Oh, my back!  My front!  My in–between!

I have to take a break. It’s too tough out there.

Why, this has got to be the Storm of the Century!

They use that terminology a lot, don't they? (...of the Century) I hope you got your snow shoveled, found your car, and lived to write another blog post.

Weather is always hyped up these days I'm obviously kidding that you can't call something the Storm of the Century until the century is over, but I hope it makes the point. As for living to write another post, we'll see.

They'll have to wait until summer to name a storm after you. In fact, it won't be a storm at all, just a couple puffs of hot air followed by the odor of flatulence on the breeze.

I can just hear Grandpa telling the kids, "I remember when Perry came through in 2016. It paralyzed three states, two synagogues, and shut down Ben & Jerry's Ice Cream factory."