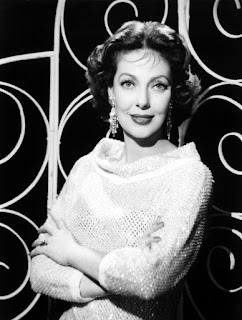 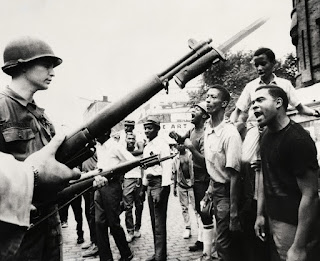 Back in the day many of my generation were inspired to protest the Vietnam War and support other noble causes, and I was no exception.  I was motivated by high ideals --- and the desire to meet girls and encounter generous fellow protesters packing really good dope.

And in this respect I was hardly alone.

One cold winter's day several of us traveled to Washington to participate in a march opposing the Vietnam War. There were large numbers of young counter-cultural types everywhere around us, and at a distance in which opera glasses would have been a blessing was a speaker who might as well have been singing opera for all my freezing ears were able to hear.

"Do you know who that is?" I asked a freaky looking guy on a nearby blanket.

She belonged at a peace rally about as much as I belonged at a convention of North American Hunters and Trappers.
Did someone lace Loretta Young’s tea sandwich with potent acid? Had she been auditing courses at MIT taught by Noam Chomsky? Was she about to burn her bra in front of us all?"

"That’s not Loretta Young," said a bearded gent carrying a peace sign.
“No? Who is it?"
"Coretta Scott King.”
The widow of Martin Luther King and a prominent civil rights leader in her own right.
Coretta Scott King.  Loretta Young.
“The names do sound alike,” I thought.
I had never quite realized before how many of the others around me were so much like me.
Nothing really wrong with that, but …
I pushed forward through the cold to try to see and hear as much of Mrs. King as I could.
~~~~~~~~~~~~~~~~~~~~~~~

And what of  the real Loretta Young?  Perhaps she wasn't so straight-laced after all. It has been subsequently learned that she had a love child with fellow actor Clark Gable.

For at least one brief moment, it seems she really did let her freak flag fly.

I went to one and only one Star Trek convention. It was back in 1984, and the late, great DeForrest Kelley was one of the guest speakers. He told a humorous anecdote about working with Loretta Young in a Western movie. She presented as very straight laced, and he tended to be liberal, both in political outlook and with his use of profanity. He struggled with keeping the profanity in check while working with this grande dame of the screen.
He was a delightful man, and I'm glad I had the chance to listen to his stories, even if the Con experience was, overall, not to my liking.

Thanks very much for writing, and for following the blog. I have also had the sense that DeForrest Kelley was a nice guy, which was confirmed by another friend of mine who knew someone who knew him well. Glad you had the opportunity to get to see him. As for Loretta Young Politics, it really did happen and I've never forgotten the earnestness with which the young guy said "oh, that's Loretta Young!" I don't condemn him at all; except for the most committed among us, all of us fall into Loretta Young Politics sometimes and often more frequently than we even know. I also saw on your blog a reference to Lewey Body Dementia which my mother has suffered with for almost ten years. I guess you must have a sad situation there too. Good luck with that, and thanks again.

I have an idea -- let's put together a grant proposal to fund a study of Loretta Young Politics tomorrow over coffee.

Good idea! I'll try to reach Loretta at the ashram and maybe she can show up and meditate with us.