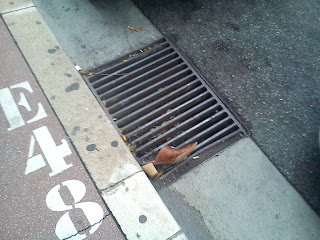 It had been a rather unhappy year for Evelyn.

A series of setbacks had hampered her at work. She had gotten sick, a man had left her, and she’d made a few highly noticeable mistakes. Finally she received her termination notice.

Before long Evelyn was wandering the streets alone. Where could she go? What could she do?

Up ahead on a sidewalk grate she spied a little shoe lost, tattered but still wearable. Next to the grate on the sidewalk was the marking "E48."  Why shouldn't she go for it? There was no reason not to.

She decided she would!

Inside the trendy Bistro E48, Evelyn feasted on Lobster Newburg, thought about how good it was to have a Golden Parachute, and admonished Claude the proprietor to get rid of the unsightly little shoe lost on the grate next to the restaurant's name on the sidewalk.

Yes, nobody need feel sorry for Evelyn. After dinner she'll wander the streets alone back to her penthouse condo and her several hundred pairs of designer shoes. Ain't unemployment a bitch?

The other Friday Fictioneers have many other takes on the picture prompt above and you can access them all by clicking here. There's no telling what they've done with the little shoe lost.

Maybe somebody even polished it.  In that case, I think I'll take it!

All's well, and all that stuff.
Neat story.

I'm all about storybook endings! Thanks.

Yes, the humiliation of a pink slip sounds almost bearable for Evelyn

Maybe even desired in her case. Meet you in Bistro E48!

good food is the best antidote for stress with a caveat. she should take it easy on the calories. otherwise, her designer shoes won't fit anymore. :)

I like the Little Shoe Lost title/theme.
Reminded me of a Mother Goose poem:

Hey diddle diddle,
The cat and the fiddle,
The cow jumped over the moon.
The little dog laughed,
To see such sport,
And the dish ran away with the spoon.

I don't understand fully my association to it other than to say that my associations are usually fairly loose. as you know. The Golden Parachute reference reminded me of a Golden Dream vision. And Lobster Newburg was the brother of Lorna Newburg, who I dated in 11 grade..

Other than that, I am fine, the medication is working, i enjoyed your story and yes, we're on for that hookah meet-up on Saturday after the morning services.

I think she could she could just take the one on the grate, hop a lot on one foot, and she'd be fine.

Love you, too - unconditionally, straight or not. Are you straight now?
Randy

There's suffering, and then there's suffering. It's all relative, really. I hope Evelyn finds gainful employment soon, just to keep her feeling useful. Love the story.

I know right? It's so hard to be unemployed. Shoes are just top of the iceberg sculptures. What will chill the caviar if the ice melts? 😘

Shoes are a luxury. I always wondered how Carrie Bradshaw in Sex in the City could afford all those expensive shoes. I'm sure Evelyn will find her way. I'm sure she'll just sail into a new job. Good one, Perry!

I suspect this affair will lead to another Bromance story - Russell

This struck a chord - my son's been out of work for three months. Perhaps he should try E48 and send Evelyn the bill.

No one ever gave me a golden parachute. Heck, not even a regular one with a malfunctioning ripcord! I don't feel sorry for the poor little rich retired girl one little bit (although I did at the beginning)! Well played, Sir! :)

Ditto what Lorna said! (She said it so well.)

Yeah, might as well lead to another Bromance story because nobody had any bromances with the first.

Thanks, but I'm not sure Evelyn doesn't feel all that terriblyun-useful wandering the streets and then picking the four star restaurant she's going to eat in for the night. You and I can split the shoe.

I dunno, Tracey. I've foregone the caviar lately in favor of the Ken-L-Ration.

I think HBO just went and bought a whole lot of shoes to be used in all its shows. I've seen Larry David wearing some of the same shoes in Curb episodes. Yes, I think Evelyn will sail, if she can get up after all the food she's eating.

Sorry about your son, but I'm sure things will work out. I'll talk to Evelyn and see what she can do.

Thanks, Lorna. I think many employers would like to give regular ones with malfunctioning ripcords to more than a few of their exiting employees. You were lucky not to get that.

Yes, she did but I would have liked to have heard it all over again from you, Alicia!

I don't even like Evelyn but yet a tiny part of me wants to be her!

I don't like Evelyn either but yet a tiny part of me wants to be married to her!

Being terminated isn't bad at all if you have a golden parachute. It's even better than a golden ticket to a chocolate factory. She can even write a book about it. Why should I feel sorry for Evelyn? Funny and well done, Perry. :D --- Suzanne

Allow me to repeat what Lorna said, "Well played, sir."