Tattered Hat in the Ring 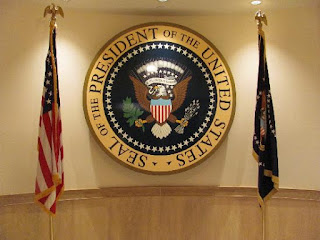 I have finally decided what I am going to do for the Great Second Act of my life.

I am going to run for the Office of President of the United States. Some people might also call it the Potus, except to me that sounds like a disgusting weed you've got to pull out of your garden every spring, so I would rather you didn't.

Why am I running for President?  Because....

a) I am as ignorant as Donald Trump, as bland as Dr. Ben Carson, and as wildly sexual as Carly Fiorina.

b) I am as thirsty as Mario Rubio, as ham-handed as Jeb Bush, and have a name that can as easily be made into something sexual as Mike Huckabee's (Block = Cock, Huckabee = Fuckabee)

c) I have need of a toupee similar to Rand Paul's, have a grin as goofy as Rick Santorum's, and am the size of Chris Christie were I to have just eaten Chris Christie.

But why do I want to be President, you ask?  Because I want to effect true change to help our country fulfill its innate potential and greatness.  Also I'm looking for something to do when The Walking Dead isn't on.  Earlier today I huddled with my team of crack advisers to develop my campaign platform, and we would have finished it too had it not been their bowling night.

Herein are the major positions I am taking, assuming I'm flexible enough at my age to take any position:

1) We must pound ISIS and pound them hard!  After that we should cut them into thin strips, bread them, and pan fry them.  (And then do the same and 100 times more to the real ISIS.)

2) I am not afraid to stare down Putin. In fact, I can win just about any staring contest two out of three unless my opponent is somebody really stupid looking like Ted Cruz.

3) I believe climate change is one of the most serious challenges of our time other than easing Adam Sandler out of the motion picture business.  My approach to combating global warming will be to build a gigantic fan the size of the lead actress in Precious and retain the cast of The Expendables to wave it back and forth.

4) We will not build a wall between the U.S. and Mexico.  We will build a shark-infested moat, and we will get the sharks to pay for it.

5) We must have comprehensive reform on Wall Street that goes far beyond Dodd-Frank all the way to All Beef-Frank.  I submit that no company is too big to fail, and I will never bail out any bank unless I have a buck or two in it.

Now you may ask once I am President if I will appoint only Jews to my Cabinet. Not at all!  I will appoint gentiles to the Department of Gentile Affairs and to the Office of the War on Christmas. And just to make sure I have the diversity and sensitivity issues fully covered, I'll make certain one of them is a woman and a woman possessed of hot smoky looks and large boobs too.

I know what you're asking now.  Political campaigns cost a lot of money even when the ideas are stellar and the candidate is A-1 Groovy.  Where is the necessary funding going to come from?

Hey, buddy?  Can you spare me ten million?

Well, with no comments I would surmise my campaign is not off to a flying start. But just watch me in the next debates, America!