Supergirl, Then And Now 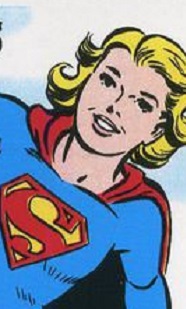 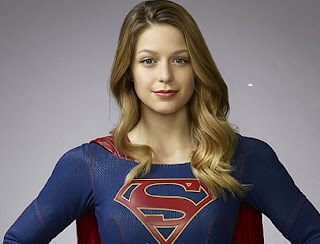 Even though I'm more or less sick of the surfeit of superheroes on TV and in the movies over past years, I did watch the first two episodes of the new highly touted TV show Supergirl.

I was compelled to.  You see, I had to find out how my first female pre-adolescent crush is faring these days, and if the new show is any indication, she's faring well, and shit, she's faring quite well without me!

In my prime comic book reading days in the late 50's and early 60's, I was always drawn to the DC Superman family of comics. While the cooler kids were reading the darker and more bad-ass Marvel Comics featuring the likes of Spider-Man and the Hulk, I was hangin' with Superman's Pal Jimmy Olson. Superman comics even featured a character named "Perry," although he was an unimaginable 45 years old or so and by far the least important character in the entire Superman legend.

Hell, Perry White didn't even have his own comic book!

Nestled within the Superman family was Supergirl, born Kara from Krypton. Although she had the same powers as Superman, the big guy chose to keep her under wraps as his Secret Emergency Weapon for several years while he wrestled with the concept of a superhero cuter than he was. But it was in those early days that Kara from Krypton, in her alter ego as Linda Lee Danvers, showed up next door to me in Merion PA.

Why someone named Linda Lee Danvers was moving into a neighborhood as Jewish as a bagel with a schmear I'll never know, but I was delighted she did. A few years older and wiser than I, she would take me flying high through the stratosphere while I popped Dramamine as fast as I could. Together we battled some of the more minor villains in the DC Universe, like Joola the Jaywalker and Matel-Ri, the Mattress Label Ripper Offer.

Supergirl spoke to me of truth and justice; I hoped she would also teach me something about the... um ... American Way, but odds are she didn't know much about that yet herself.

As a sign of their friendship, Superman gave Jimmy Olson a special signal watch that called him whenever Jimmy was in danger. Not to be outdone, Supergirl gave me a set of maracas. They were a bit less subtle but very effective; for a dazzling year or two in the early 1960's, not a single fifth grade girl dared beat me up.

But times changed. Supergirl's existence came out to the world and she began hobnobbing with the major superheroes and even President Kennedy while I transitioned from the Girl of Steel to buns of steel --- with accompanying superboobs --- in Playboy Magazine. I doubt I was alone among early teen-aged boys in going straight from DC to sleaz-ee back in the day.

But I never forgot Kara from Krypton.

And so I tuned into the new Supergirl show the last two weeks, and it is slick. Supergirl is adorably played by Melissa Benoist and she is stronger, funnier, and cuter that her comic book forebear ever was. Everything about the show is first class including the acting, production values, and special effects, and I can't help but wonder how George Reeves, the screen's best ever Superman, would have felt if he could have seen the Grade A treatment given Supergirl compared to the schlock values affixed to his 50’s show.

Who knows, he might have chosen to stick around.

But there’s no denying it:  Supergirl doesn't need me anymore. An A-Lister in every respect with a sister and two dedicated friends who know her identity, she even works for a Devil Wears Prada modeled-boss played by Calista Flockhart.  And Supergirl is also 24 years old. How did I age 55 years while she aged only 8?  I guess there's no limit to the powers of the people from Krypton.

I probably won't watch Supergirl any more, but I'm glad to know it's on TV and I'm glad to see how well Linda Lee is doing.

Up, up, and away, Kara from Krypton!  May you fly high and proud.

And maybe once in a while, could your old friend hitch a ride too?

Somehow I suspect your parents named you after Perry White instead of Perry Mason. Thank God, you caught the mattress label ripper. I assume he's still locked away in a white-collar federal penitentiary and tearing all the labels from beneath the chairs and recliners in the executive lounge. He'll probably team up with Bernie Madoff when he gets out.

He was vicious, and he got a sofa and recliners before Supergirl and I caught up with him. Luckily Supergirl was able to meld the labels back on with her heat vision. I fondly remember those days, but anymore Supergirl doesn't take my calls, which I make to her without a phone.

Very funny. One of my all time favorite posts. I confess- I've torn a few labels off in my day but only in the privacy of my own home. Mostly.

Quick, Supergirl! Take out Tracey Delaplain, then use your X-ray vision to find out how many labels she's ripped off!
Thanks for the nice compliment.

I discovered Supergirl when she joined the Legion of Superheroes, by far my favorite comic book for many years. And--naturally--I had a huge crush on her. She was just so darned cute, and the short skirt did it for me, too. The only thing that bothers me is that, while she aged 8 years, I aged three or four decades.

Yes, and I have the first comic book featuring the Legion of Supeheroes, but it's not in particular good condition. I loved Saturn Girl who may have even been cuter than Supergirl as she was drawn in the late 50's. I also really liked Lana Lang who was far hotter than Lois Lane. Only problem with all these women was that they didn't exist and if they did, wouldn't have really had anything to do with us after all. But when dreaming as a young boy, well, anything in the future seemed possible.

Saturn Girl? But ... would you want a girlfriend who could read your mind?! That's a recipe for lots of face slaps and shin kicks.

I'm with you on the loves who never existed. My first crush was Dorothy Gale of the Oz books; we were the same age at the time, although since in the books she moved to Oz, she'd now be about 70 years older than me.

Yes, there's almost a sense of loss, especially as you grow older, about the girls you loved who never existed. When you are a teen- age boy, however, they seem to really exist in books, movies, TV shows, comic books, and anywhere you might find them.

Anyway, thanks for writing and I enjoy your work too.

I guess it's different if you're a girl. I never really had a crush on Supergirl. Now, let's talk about someone who deserves having a crush on him: Spiderman! Oh, Spidey, how you do turn a girl's head.

I don't know how to break this to you, Joy. I'm so terrified of spiders I stepped on Spidey last week. They want you downtown to identify the body.

Yes, but I'm so terri