All the World’s a Stage, with Commentary by a Regular Guy 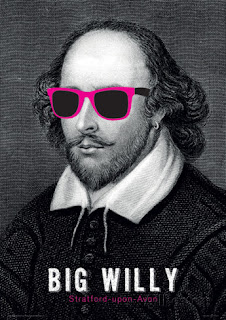 All the World’s a Stage,
by William Shakespeare
with commentary by a Regular Guy

"All the world's a stage, and all the men and women merely players."

So how come we're not all being paid scale?

"They have their exits and their entrances."

Exits and entrances? Doors opening and closing?  So life is like an English bedroom farce, like Noises Off?

You mean like Jerry Lewis in The Family Jewels?  I had no idea you Brits loved ol' Jer as much as the French!


"His acts being seven ages."

Seven ages?  Crap,I was counting on at least eight or nine.  I better hie me hither to yon bucket list ASAP!

"First the infant, mewling & puking in the nurse's arms."

Oh, nurse!  If I were in your arms, I might be mewling but I sure as hell wouldn't be puking!


“Then the whining schoolboy, with his satchel and shining morning face, creeping like snail unwillingly to school."

Verily, he creepeth like snail because his doggeth ate-eth his homework!

Y'know, ‘sighing like furnace’ doesn't exactly grab me as the perfect simile for winning the heart of fair lady, unless she’s an electrical contractor. No wonder Shakespeare didn’t get many dates!


"With a woeful ballad, made to his mistress' eyebrow."

Really? You’re singing to your mistress’ eyebrow? Your woeful ballad might be aimed a couple of feet woefully too high, if you catch my drift.


“Then a soldier, full of strange oaths and bearded likes the pard."

Don't worry, if those oaths include four letter words or start with the initials M and F, there’s nothing strange about ‘em at all. And hey, that's one cool beard, but you might want to trim it every now and six years.
(And I googled "pard," Shakespeare. You're not going to one up me!)

“Jealous in honor, sudden and quick in quarrel …”

If you don’t mind, I'm gradual and slow in quarrel because I tend to get the shit kicked out of me otherwise. And I'm not jealous in honor although I am jealous of anyone who's got a jacuzzi.

"Seeking the bubble reputation, even in the cannon's mouth."

Un-huh.  If it's all the same to you, maybe I could seek my bubble reputation by, say, winning the lottery instead of signing on to become cannon fodder?


"And then the justice, in fair round belly with good capon lined."

Well, to tell you the truth my capon is not so good.  In fact, I actually have kind of a lousy capon, but at least it is fully lined.  And as for this fair round belly, I don't give a shit, I'm not giving up Coke!


“With eyes severe and beard of formal cut.”

So you got your beard trimmed, and now you look like a member of the Highway Patrol?  Dude, it was just a suggestion. Hey, don't squint at me with those goddamn severe eyes!


"Full of wise saws and modern instances, and so he plays his part."

Wise saws?  Modern instances? Okay, here's one: "There once was a man from Nantucket ..." Yep, got my wise saws and modern instances all covered here!


"The sixth age slips into the lean and slippered Pantaloon."

Nice trim figure, you crazy Pantaloon you. Hey, even nicer slippers! You're pretty much all set now until you get to that time of life where you're missing all your parts, six quotations down.


"With spectacles on nose and pouch on side."

Hey, what’s in that pouch?  Is that what I think it is? What do you want for the pouch?  Sure, you can keep the spectacles.

"His youthful hose, well saved, a world too wide for his shrunk shank."

Well, there’s certainly a lot worse things to be shrunk than my shank!


"And his big manly voice, turning again toward childish treble, pipes and whistles in his sound."

Like Truman Capote?  Maybe I'll write me a best seller!


"Last scene of all, that ends this strange eventful history ….”

You mean the epilogue? Like in a cop show? Always my favorite part!


“Is second childishness and mere oblivion."

Childishness?  Gonna be great to be a kid again!  And it's also great to know I’m only facing mere oblivion, not total oblivion!

Email ThisBlogThis!Share to TwitterShare to FacebookShare to Pinterest
Labels: As You Like It, historical parody, Shakespearean humor, William Shakespeare

I saw the 2nd childhood coming, but not the shrunk shank. Please accept my apologies. They do organ transplants for every other part of the body, why not that one?

I'm not worried about my shrunk shank unless the Bard is using it in a different sense. You know he probably is, how did he know?!

Everyone is supposed to love Shakespeare and be familiar with his work. Pish posh! The man (or at least his verse) was bonkers, as you so cleverly reveal. I can excuse people in his era. They were grog drinkers. But what's everyone's excuse since then? ;)

I didn't mean to reveal his verse was bonkers so much as to reveal that I am bonkers, but every interpretation is a good one. Hint: don't look for the plotting to be paramount in these plays, look at the language. Thanks for writing, Lorna. How about some grog?