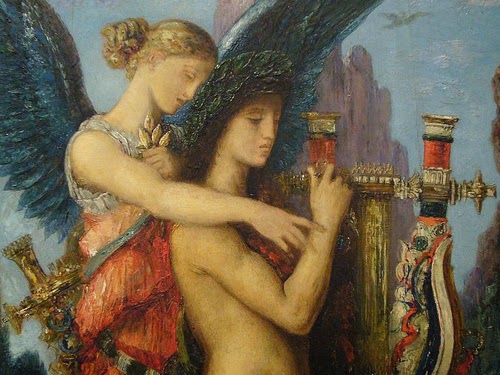 The Muse
Decidedly Not Mine, However

"Muse! Muse!"  I hollered. "Where are you? I haven't had a post accepted by the Broad Street Review in months!"

"Yeah, I’m aware of that, Boss. You know, I’m kind of annoyed you're not living up to my high standards as a muse."

"Living up to your standards?  The best idea you've given me in the last six months was a television show featuring a panel of chefs who cook for senior citizens called The Gum."

“Yeah, I've noticed food is very popular with you too.  It flies out of this house like it's being chased by ISIS.”

"Well, good luck with puberty. And another thing: the idea you gave me about a spoof of a Facebook page for Director David Lynch tanked as badly as Chevy Chase's career.”

“What are you saying?  Are you telling me people on the internet don’t love posts about vomit and children who look like spermatozoa?”

"It was my worst post since The Pure Joy of Macroeconomics, which by the way, you gave me as well."

"Boss, did it ever occur to you that you're not very copacetic to work for?"

"I'll remember that the next time I let you borrow the car and you turn up two weeks later in Tijuana hugging a donkey."

"Traded?! They have trading in the muse world?"

"Of course they do.  I myself was formerly the muse to Lucy Maud Montgomery who wrote the Anne of Green Gables novels."

"You were responsible for Anne of Green Gables?!!"

"Nah, I told her to write pornography.  Next day I was traded."

"Well, to whom do you want to be traded now?"

"But all those guys are dead!"

"Of course they are.  At this stage of the game, I really don't want to work all that hard."

"Fair enough.  Do you think you could  trade me to someone who uses the Oxford Comma. I hate it when a guy writes:  'I brought dinner, Grandmom and a turkey.'”

“Well, you may have to settle. Let's just hope Grandmom tastes half as good as the turkey!”

It doesn't look like you've had many offers yet, Perry. What else can you throw in to sweeten the deal?