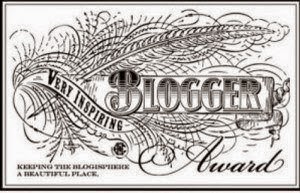 We've got a winner!

That is, never met in person.

I know Carrie Bailey through the Internet, Facebook, and Twitter. In her 30 plus years of life she has lived on multiple continents, raised a son to adulthood, authored short stories and poems, become a painter, and earned a graduate degree in New Zealand. During that same period of time, what I have done is put down the clicker, stand up, and go from the den to the kitchen for snacks.

Carrie has been kind enough to tag me for the highly coveted Very Inspiring Blogger Award, and I must say that I am truly delighted to walk off with an award this year that even Michael Keaton didn't get. Thank you, Carrie.

As part of the gestalt of winning this award, it is now incumbent upon me to share seven facts about myself.  Some of what follows may not be suitable for children or for that matter, suitable for anyone.

1) I was born and raised a Buddhist and went to Buddhist School until I was 13 to prepare for the Coming-of-Age Buddhist Ritual, in which you get a lot of presents. To this day, older Buddhist women are constantly coming up to me and saying "Have I got a nice Buddhist girl for you!"

2) I regularly fill in for Bruce Wayne as Batman on weekends and holidays, but mainly I just hand out parking tickets and pose for pictures with Cameron Diaz.

3) I did successfully get though law school many years ago (there were far fewer laws back then) but my legal career began its rapid downhill slide when I identified "jurisprudence" on the Bar Exam as "some chick who came over on the Mayflower."

4) I am deathly afraid of spiders.  Many people say I should appreciate spiders because they eat other bugs. Well, I'm rooting for the other bugs!

5) I have always wanted to be referred to as "The Lovely and Talented Perry Block."

6)  I am terrified of sharp knives. I have spent the better part of the last twenty years attempting to develop food with zippers.

7) I have scoliosis (curvature of the spine). But on the bright side I charge Zorro a ton of money to use my back for practicing the "Sign of the Z."

Bonus Fact: I'm not particularly good at parallel parking.  I have been known to be unable to pull into spaces Godzilla has just vacated.

As I begin the glorious year ahead as A Very Inspiring Blogger, I will keep in mind that if I cannot complete my duties for any reason whatsoever --- and not just the ones that involve people pointing at me and giggling --- the first runner up will take over the responsibilities of my crown. Therefore I am designating the entire list of folks below as first runner-ups.

They are also not coincidentally those folks I am personally tagging as Very Inspiring Bloggers.  They need feel no obligation to designate other people as inspiring bloggers if they prefer not to, because I have that power!

I might have named many more, especially among the flash fiction group known as the Friday Fictioneers, but I must begin my reign. I plan to do some major league inspiring later today.

But first, I'm gonna get me a nap.

Awwww, thank you, Perry. You're one of the single most obviously Buddhist people out there. I'm surprised about the spiders though. I love those little things.

You won't believe this but some people take me for Jewish! You're welcome, Carrie. Now don't give me away as Batman, I promised Bruce Wayne.

You are very inspiring, Perry. Carrie made an excellent choice and I learned that you are the Humpback of Havertown. I can't believe your muse didn't work that in to a post.

Perry, I know its been awhile since we chatted, but you are always my last laugh of the day. Thank you!

Thank you for the honor, Perry. How sweet of you. And you called me quirky and original! I love that. We have a lot in common. I'm afraid of knives and spiders, and I, too, fill in for Batman! I bet you didn't know that about me. Congrats. You always inspire.

A fossil like me? But, Russell, you already are!

Thank you,Libby, good to hear from you. Most people usually think of me as the last straw of the day.

Y'know, we've got to get our Dark Knight schedules straight. Remember the time all three of us showed up at the same time to stop Bane from destroying Gotham City, and we had to draw straws and we couldn't agree who would stop him and meanwhile he did destroy the city? And what if a giant spider with a knife is with him next time? Keep inspiring.