The Prohibition of Birthdays 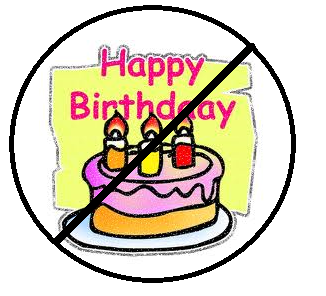 It was America's second major attempt at Prohibition. It was indeed a noble experiment, but one which ultimately was doomed to fail.

It was the Prohibition of Birthdays Act.

In the early part of  the 21st Century, the practice of observing  birthdays had fallen out of favor.  Facebookers were  sick to death  of wishing "Happy  Birthday" to people they didn’t actually know, the price of streamers had risen alarmingly due to the poor construction paper crop of 2017, and everybody was continuing to grow older, despite the fact that most people didn't want to.

Anti-Birthday leagues began forming.  Radical Anti-Birthday activist Carrie Nationstate brandishing a hatchet raided birthday parties, chopping her way through Barbies, Kens, Hot Wheels, and all manner of pointy party hats.  Baby Boomers were especially militant in calling for an end to birthdays;  in Cleveland a mob of 64 year olds attacked a contingent of party clowns, beating them so severely that the clowns never again needed to paint tears under either eye  to be seen to cry.

With pressure mounting, Congress drafted The Prohibition of Birthdays Act or PBA,  proposed by Senators Dianne Feinstein, Chuck Grassley, and Orrin Hatch, whose combined ages equaled 241, which all three thought was enough already! Support grew swiftly and in the end only conservative commentator Charles Krauthammer remained opposed, primarily because he hated anything that might cause him to smile on Fox News.

On January 15, 2017, birthdays were outlawed throughout the United States and all its possessions including Guam, even though nobody in the United States knows where Guam is or if they even have birthdays there. Under the law, it became illegal to celebrate a birthday, send a birthday card, or even utter the words "pin" and "donkey" in the same sentence.

The beneficial effect of the end of  birthdays was swift and immediate;  with age no longer a factor,  Abe Vigota and Scarlett Johansson announced their engagement.  All around the nation fat, balding, and wrinkled Baby Boomers gathered together and created the slogan "Don't Trust Anyone Over 75," content in knowing they could never be 75, no matter how much they came to look like Wilford Brimley.

The new law, however, soon began to show its flaws.   Those with an on-going desire for birthdays soon sparked a wholly new illegal business industry ruled by organized crime --- the Speak Cheesy!

“My Joel is going to have the best 8th birthday ever, isn’t he, Mr. Calebresse?”

“Of course!  All da pizza he and his friends can eat."

"Oh, Mr. Calebresse?  Will we have noisemakers and giftbags too?"

"Sorry, Mrs. Grossman.  They're too hot.  But we do got bathtub ice cream!"


A powerful repeal movement formed consisting of a coalition  of cake bakeries, the guy who holds the copyright to "Happy Birthday to You," and millions of 12 year old Jewish boys afraid they'd never get their Bar Mitzvah presents.  Finally on  January 1, 2018, a decidedly sadder but wiser nation  declared  the Prohibition of Birthdays Act repealed.


It was a noble experiment but in the end it was doomed to failure.  It failed because people --- despite the noblest of their aspirations --- want and need bland yellow cake with white icing adorned with the words "Happy Birthday, Hubert," especially if their name is Hubert.

I'm not giving up.  Ms. Nationstate, hand me that hatchet!

Don't worry, Perry. You'll get no card from me. Just because you're old enough to play Abe Vigoda's father in the remake of Barney Miller is no cause for celebration. Who needs cake anyway? Jello is a much better option for oldsters who've lost all their teeth.

But that's just it; we won't be oldsters if they pass this bill; we'll be "boy wonders" like Orson Welles! Actually nobody read this post, so I don't expect we'll be boy wonders any time soon.