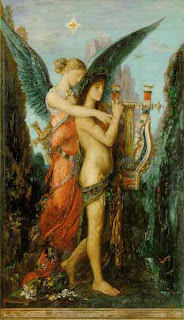 Like most writers, I have my own personal Muse.

"Muse," I called out yesterday afternoon.  "Could you come in here please?"


"I'm coming, Boss," I heard the Muse say from inside the kitchen. "Just makin' me a sandwich, be right there.  Hey!  We're outta beer!"

"That's not surprising what with the blow-out you had here last Saturday," I said.  "Say, did you ever replace the batteries to the vibrating  ..."

With that, the Muse stumbled into the office, spilled a bit of coffee on the rug, and plonked down on the sofa.

"Then you must have an even lazier Muse than I do!"

"That's hilarious, Boss. Jokes like that show how badly you need me!"

"That's what I wanted to talk to you about today, Muse.  Frankly you don't seem to be supplying me with much Inspiration these days."

"What the hell are you talking about, Boss?!!  What about my brilliant idea of people coming with information labels on 'em,  like food does?"

"You mean labels like Supplies Less than 2% Minimum Daily Requirement of Mental Stimulation or Better if Used With Eyes Closed And Bag Over Head?"

"Oh, I tried it.  I got fewer page views than a book in Sarah Palin's house."

"Boss, you're nuts!  How about all the Inspiration I'm constantly giving you in the shower?"

"If you call turning the hot water on and off, goosing me, and making that sound like the phone's ringing Inspiration!"

"So you want me to spoon feed you comedy, Boss?  Okay,  how's this:  Parody Mitt Romney's criticizing Obama's ideas while offering none of his own by having Romney sing Groucho Marx's Whatever It Is, I'm Against It!"

"Muse, you gave me that one three days ago. Turned out so abysmally Groucho Marx disowned it!"

"It did sound familiar. But you're not bein' fair, Boss! Look at all the things I do for you!"

"Yeah ...  drink my vodka, eat me out of house and home, and supply me with ideas like How about we have Ginger and Mary Ann mud wrestling?"

"Any other criticisms you got?"

"Yeah, why do I have a fat middle-aged bald guy as my Muse anyway?  Why don't I have a Muse looks like Sharon Stone?"

"Maybe Stephen King has a Muse that looks like Sharon Stone.  You're lucky you don't have a Muse looks like Sly Stone!"

"Aren't you forgetting something?  You can't fire me!"

"Want me to call the union rep right now, Boss?"

"Nah, you win.  Tell me your idea again about the Jewish zombie who won't mix brains with dairy?"

"Sure.  And, by the way, I've been meaning to talk to you 'bout you springing for a much better diversity of investment funds in my 401 (k)!"

May the Muse be with you!

And not with me.

Of course the darn muse is union. Figure. ;)

Serves me right for getting my Muse off Craig's List!