The Greatest Hits of Mitt Romney 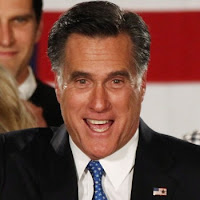 For almost two years, he was a part of our lives.
Now he's gone...

Don't forget him the way he's forgotten you!
Especially if you're one of the 47%.

Now, for the first time
from

You get these great Mitt classics:

Whatever It Is, I'm Against It
With Groucho Marx' classic song playing throughout, Mitt explains
how he manages to be against everything and for nothing ... with hilarious results!

You're No Ronald Reagan
Co-starring Newt Gingrich, two feisty GOP candidates scramble all over each other to prove who's more like Ronald Reagan until the Great Communicator himself has to intervene from the Great Beyond to settle the score!

Super Mitt, Olympics Savior!
Mitt dons his red cape to save the Olympics and bend steel in his bare hands --- a hapless steel company Bain Investments buys and dismantles, that is!

Plus the Crowd-Pleasing Favorite

The Openly Gray/Bi-Positional Candidate
Mitt comes out of the closet as openly gray and bi-positional, always taking both sides of every issue. But even though he's openly gray, he's hardly the first ever bi-positional candidate!

And there's even more!
You get absolutely free these
GOP Based Classics:

Fat Chance
He may be the rising star of the Republican Party but it's his rising moon that's the problem.  Here's the skinny on Governor Christie!

An Open Letter to the Non-Millionaires of America
The GOP begins its outreach to a class of voters it's never reached out to before.
No argyle sweater?  We'll wait while you buy one!


You couldn't find these posts individually
without subjecting yourself for minutes at a time
to Perry's lame website, but now
Time-Life Books has compiled them all for you!

The Nouveau Old, Formerly Cute
Greatest Hits of Mitt Romney
is
only $39.95!

But wait!
If you call in the next ten minutes,
Paul Ryan will
slash the price to
only $29.95!

And there's even more!
Act in the next ten minutes and you also get this
Barack Obama Classic
absolutely free!

That President!
Though conservative pundits may call him "this President," the rest of the world loves the cute, spunky, totally adorable head of state known as "That President!"

This offer is not available in any store.
And if it were, it would be in a bin in the back
for about a quarter or something.

Remember when we used to be considered prestigious?

Call 1 800 BYE MITT.  Operators are standing by.  Visa and MasterCard accepted. Void where prohibited by law which ought to be everywhere.

All right, I'll comment: these posts are funny! You should read them!

When you want something done ...