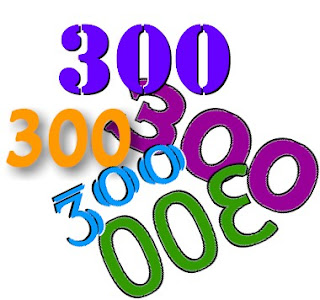 You did?  Well then, proud of you, dude!  I've got a damn perceptive reader in you!

This is the glorious celebration of my 300th blog post! Welcome, come on in and make yourself at home.  Take your shoes off and  .... UCCCCHHH!!!, on second thought,  why don't you put your shoes back on and have some punch instead?

Have you met some of my other readers? Let me introduce you to ... well, there's umm ... say, why don't you have some punch?  I'm sure all the other readers will be arriving soon; I understand there's a tie-up on the Expressway,  a big book review over at Goodreads, and the new Pope is in one hell of a Twitter war with the old one!

While we're waiting,  as is a tradition on my anniversary posts (I did it once),  I'd like to answer a few questions that are often raised regarding my blog, primarily by me:

How would you describe your humor writing, Perry?

No, I mean, is it droll commentary on the foibles of humanity, mordant satire on the sorry state of politics, pop culture, and world affairs, or self-deprecating but affectionate takes on the day-to-day travails each of us face in our efforts to negotiate the post-absurdist world in which we live?

Why do you suppose the blog is still so unpopular?

Because people like you don't talk me up to others.

But I'm not a person;  I'm a composite construct created by you to ask a bunch of inane questions.

And you're an uppity composite construct too!  Now I know how Dr. Frankenstein  felt.

But you made up all the questions!

Yeah, remind me next time to make up ones where I get some laughs.

Do you think maybe your writing is too Jewish?

Too Jewish? How?  I'm a Pentecostalist.

Well then I'd definitely cut back on my watching The Daily Show if I were you.

Such a funny composite construct you are!

Even that phrasing was too Jewish!

Maybe I ought to have you write the posts.

Okay, big shot, here's the keys to the blog, get yourself some punch, I'm outta here!

I'll be over at Facebook if you need me.

I don't expect to.


And hey you, our one reader,
Put your damn shoes back on!

Note: Despite what my little composite construct says above, I'd sincerely like to thank all of you who from time to time read this blog, including the guy without shoes guzzling the punch.  I very much appreciate your support,  and I'll try to do a halfway decent job with the next hundred posts so!   Thanks again!

Oy! I showed up for this? Where's the lox? What? No herring? I'll settle for chopped liver. And you call this a party?
Mazel Tov on your 300th blog post. Was that too Jewish?
Shalom,
Rochelle

As I said, I'll try to do a half-way decent job with the next 100 or so. Or my composite construct will!

Thanks for showing up, Rochelle. I believe there's a vat or two of punch left.

The good news is I didn't have to hunt for a parking space. The place looks like a ghost town. You're the only guy I know who decorates with cobwebs and seven layers of dust. Is that the same punch you served at the 100th blog party? That would explain the green stuff floating the surface.

I invited both of my fans to come along, but Westinghouse made up some cock & bull story about having to polish his blades and Jesus just rolled his eyes and stuck out his tongue at me. Next time have dancing girls. That'll bring a crowd.

I understand Westinghouse and Jesus were both busy taking sides in the Papal Twitter war. I guess even 60 plus year old dancing girls are no match for that.

Well, thank you for coming, Russell... Russell? Crap, lost him to Goodreads!

Congrats on the 300th post. I think you're doing a fine job. I look forward to 300 more snark filled posts.

Thanks, Brian! Hopefully the great artist Meeksy will join us somewhere along the way as well ...

Mazal Tov. Lets celebrate with 4 cups of wine and matzah!

And here's a Fifth Question for you: What's better than an old friend on Twitter? Answer: Very little, especially when it's a friend like Shoshana Yossef! Happy Holiday!