When Irish Eyes Are Whining 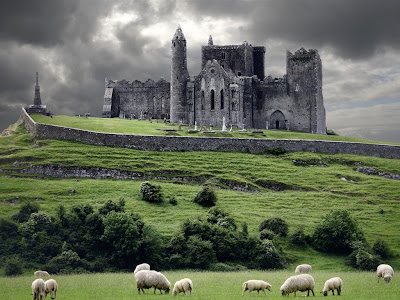 There once were two fellas said "aw, shucks!
On the Emerald Isle bet we'll find luck."
They made many a pass
At many a fine lass
To which many a fine lass said "Hell, no, schmucks!"

The luck of the Irish, I believe, is truly a real and wonderful thing. It begins with how lucky the Irish are to hale from a place of  such uncommon beauty  as the Emerald Isle, a lush green plot of land I was lucky enough to visit over 40 years ago with my college friend Howie.

Howie and I traveled throughout much of Ireland that one summer, spending time in towns and villages like Dublin, Galway, Cork --- where I kissed the legendary Blarney Stone which frankly provided me more of a response than most of the women we met --- and yes, even the above-referenced Limerick as well.  No part of our trip was more memorable, however, than what has been come to be called the "Night of 1,000 Brews  and Two Discordant Jews."

It had been a long day of hiking and hitch-hiking as Howie and I came upon a pub on the outskirts of a small village, the name of which posterity has never quite finished yelling at me for forgetting. As darkness settled around us, we heard the sounds of those in the pub  loudly, lustily, and very beautifully singing an array of Irish tunes to some musical accompaniment. It seemed like it might be a kind of special night or at least a special weekly occasion for the local residents at the pub.

"Americans?" said the pub keeper as he served us two beers we ordered.  "Welcome, lads, we're delighted you're here!"

From all corners of the pub, folks came forward to greet us, pat us on the back, and make us feel welcome. And beers, lagers, stouts, and all manners of alcoholic brew came flying at us from every direction --- left, right, below, and above!  ABOVE?  Well, I don't know if Jesus is real, but if he is and he does intervene in the affairs of the world, where else would he start but Ireland?  We couldn't have felt more at home if we were at a convention of Jewish grandmothers and it had just been announced that we'd both gotten into Harvard Medical School.

Then, in the midst of that Emerald enclave of Gaelic gaiety and Hibernian hospitality, there came those ten awful words I'll never forget from that evening in the pub by the village whose name I have woefully ever forgot:

"Now, we'll have a song from the two foine lads!"

Now I happen to be a person who cannot sing a note; frankly I couldn't lift a tune, let alone carry one.  And compared to Howie,  I was Celtic Women.  As the two of us would hike along the roadways in Ireland and chance to lift our voices in song, shamrocks would wilt, fertile fields fall fallow,  and leprechauns see fit to commit suicide.

A fan of the actor John Wayne, Howie thought that because Mr. Wayne starred in the filmed in Ireland movie The Quiet Man,  a song from another of the so-called Duke's movies might find favor.  Such was the measure of our desperation.  As a broadly grinning gent led us up to the microphone, Howie hastily scribbled out the words to She Wore a Yellow Ribbon from the movie of the same name.

"Here's the lads!" the gentleman exulted.

I looked at Howie,  and he looked back at me.  We took a deep breath and gave forth:

Under the sounds of our execrable discordant non-harmonizing. I sensed murmurings of ...

"Sweet Jesus, I thought everyone could sing at least some!"

"Scratch visiting America off our lists ..."

"Is is possible to get some of these beers back?"

We concluded orally raping the Duke, John Ford, and their famed cinematic collaboration, and I breathed a sigh of relief.  I looked at Howie, and he looked back at me.

"One more time!" he shouted.

As I've said before, the luck of the Irish truly is a real and wonderful thing.  Sadly, for the folks this one night over 40 years ago in one pub on the outskirts of a village in Ireland whose name posterity still yells at me for forgetting, it had just run out.

As hospitable as you can get, sir,
In the pub they kept Perry's lips wet, sir
Beers flew at him fast
Which he drank to the last
And Perry is still peeing yet, sir! 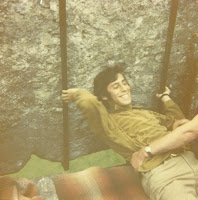 You never forget your first stone!

It was, Russell, though in some respects I was really too young to fully appreciate it.

And unlike most of what I write, this story is 100% true down to the song we sang and Howie going for another chorus. Whether anybody there actually wanted their beers, lagers, or stouts back is open to question.