Whatever It Is, I'm Against It 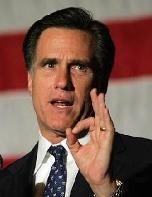 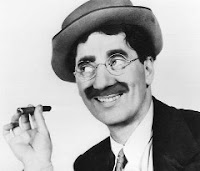 And,  Mitt?  Tell'em Groucho sent ya!


Welcome, I'm Bob Schieffer of CBS News and this is Face the Nation!  Today's guest is Governor Mitt Romney, Republican candidate in the 2012 Race for the Presidency of the United States.

Romney:  You're like a working class poet or something, Bob!

Schieffer:   Um,  thanks again!   Now, Governor Romney, I'd like to ask your thoughts about the President's decision to stop deporting certain illegal aliens who came to the United States as children.

Romney: Bob, let me answer that this way:


I don't know what he has to say
it makes no difference anyway.
Whatever It Is, I'm Against It!

Schieffer:  Governor Romney, why, you're a Groucho Marx fan, I didn't know!  But tell me, please:  what are your views about the President's new Immigration Policy?

or who commenced it.
I'm Against It!

Schieffer: Ha-Ha.  I think!   Then let's look at ObamaCare, which you oppose.  But isn't it modeled on the same health care program you yourself brought to Massachusetts?

but let's have one thing understood,
Whatever It Is, I'm Against It!

Schieffer:  Let me phrase that another way then, Governor Romney.  What are your views on ObamaCare itself?

or condensed it,
I'm Against It!

Schieffer: Governor,  you seem to be against all the President's policies without offering any of your own.  Why is that?

I used to yell from night till morn.
Whatever It Is, I'm Against It!

Schieffer:  So you decided on this campaign approach long ago?  How would you describe  your approach?

since I first commenced it,
I'm Against It!

Schieffer: Thank you, Governor, it's been enlightening.  You know,  I had no  idea you were such a huge Groucho Marx fan.

Schieffer:  Harpo Marx?  You mean the brother who spent his entire career saying absolutely nothing?

Romney:  There you go!