Journey Through The Jungle (FF) 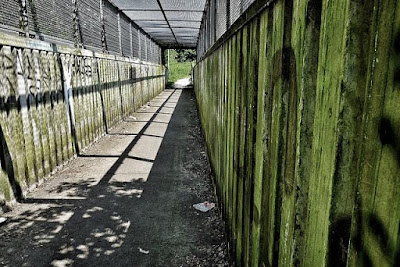 Professor Stitzel loaded an extra canteen into his fully stuffed backpack, hoisted it on his shoulders, and exited the flimsy shack that had served as his lodging in Longjeans, Upper Kamba.

He was headed across the desolate 400 mile expanse of wilderness for Port Diluvia, the fruits of his six month research to be delivered directly to Queen Numbia.

Professor Stitzel hugged Maya and assured her one day she would see him again. Waving goodbye, he walked across the rickety bridge out of Longjeans and as he reached the bridge's end, he clambered aboard the high speed train.

“Think I'll order a drink,” thought the Professor, “and then take me a long nap.”

You gotta admire Professor Stitzel. The man spends six months doing painstaking research in a desolate outpost in a remote country aided only by his assistants Scarlett Johansson and Charlize Theron and then he's faced with a long arduous trip back to Port Diluvia on a high speed train which is fresh out of his favorite vodka. What a guy!

And what a great bunch of writers are the  Friday Fictioneers, whose stories based on the picture prompt above are available by clicking here.

I have serious doubts about his relationship with little Maya.

Your postscript is very illuminating!

What are you talking about, did you go to Penn State? Clean up your mind!

You're right. I just fixed it; now it's a touching parting appropriate for any jungle movie you've ever seen.

Well, I just wanted to make it clear what a sacrifice this noble man made.

The minute that drink arrived I had my doubts about Professor Stitzel. Another fun story, Perry.

Thank you for changing my name to Professor Stitzel in this story. You know how modest and humble I am.

Charlize and Scarlett said to give you the finger.

it looks like the professor has the best job in the world. is he looking for an assistant?

Nah, he already has two of them. He tells me they're working out.

Pretty sure you've never given ... never mind! Thanks for the comment, Clayton.

Yes, and I understand his assistants did most of his work. Thanks, Alicia.

The poor professor, after so much exhaustion he surely deserves a drink. :)

Yep, you gotta feel for the poor guy.