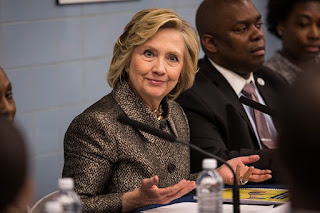 For these suggested excuses, Hillary:
No Charge!

It's no surprise to many that Hillary Clinton has a bit of a reputation for mendacity. It's also no surprise that I am trying to obscure this fact by using a word like "mendacity" that I hope you don't understand.

Clinton's occasional lack of candor is concerning but is rendered somewhat less so since she is running for President against a walking turd who hasn't told the truth since he filled out the application for Hair Club for Men.  Still, one wishes Hilarity would play it a bit more down the straight and narrow;  sadly she was just awarded Four Pinocchios by the Washington Post for recent statements to Chris Wallace regarding her e-mail controversy.

Hillary, you can do better!  Here are some suggested excuses you may use right away to slam E-mail Gate shut once and for all:

7) "Must have left those e-mails in my other pants suit!"

6) "I relied on and had every reason to rely on the judgments of the 300 professionals with whom I exchanged e-mails, each of whom I could incinerate instantly with my heat vision."

5) I had a "short-circuit" so strong when I was talking about the e-mails it curled Debbie Wasserman Schultz' hair!"

4) "Server problems?  Absolutely. His name was Bruce and the quail he served me was decidedly under cooked!"

3) Too many evenings spent strummin' the ol' banjo and regaling staff with patter and song.

2) "All that happened during my drinking days."

1) "Frankly, Bill and I can do whatever the fuck we want!"

Excellent list, Perry. I can't wait to see your list pertaining to Trump and the Hair Club for Men.

Aren't you a member of that group as well?

I'm not only a member, I'm the President. (Of the hair club for men, not the country)