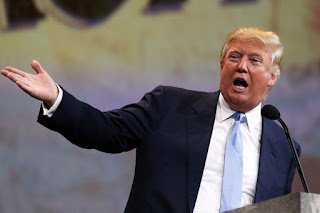 And the nominees for Best Picture for 2016 are:

And the Winner is:

Accepting the Award for Presidential Psychopath is the Star and Co-writer, Donald J. Trump:

“Thank you everyone, this is just AMAZING!

Exactly two years ago I conceived of the idea that I could do an amazing service for the American people by showing them how readily a demagogue could come to power in this country.  After all, I’ve been lucky to make some money in this amazing country, and this would represent my chance to give back.

So I put together the concept for Presidential Psychopath with the amazing theme of someone well known in America with a dash of charisma achieving political power --- even becoming President of the United States --- although he is amazingly depraved, deplorable and damnable in every way. It’s happened in other countries and it could happen here in this amazing country unless we are amazingly vigilant.

Now I needed someone to fit the bill for the lead character. I guess I’ve been a little guilty of immodesty in the past in putting my name on buildings and such, and I thought to use that amazing but regrettable trait --- and I am in therapy to correct it --- to show how the main character is familiar to the public before he begins his nefarious and amazing drive to the Presidency.

So after a lot of amazing coaxing by my family and liberal Hollywood friends I agreed to play the lead character. I’m no actor … I hope ... I hope I wasn't too short of amazing in the role ... was I?

I want to thank so many people who helped make Presidential Psychopath such an amazing success:

Thank you, Dr. Ben Carson, for pretending to be a clueless loser so I could ridicule you right from the start of the campaign to establish fictional Trump’s amazing pattern of name-calling; Megyn Kelley --- dear sweet Megyn Kelly --- for putting up with so much offensive invective; Megyn, you are an amazing class act all the way!; all the other Republican candidates for playing their parts so amazingly well and agreeing to sacrifice their campaigns in order to make Presidential Psychopath happen so amazingly.  And I cannot forget to thank the members the press for not questioning the character’s amazingly vast store of lies and hypocrisies until it was too late.

I mean, Trump University?  Really? Can you believe what an amazing moron I am sometimes?

I want to thank our amazing writers;  I wrote very little, they did it all: for the early funny segments, Tina Fey, Amy Pohler with contributions by the amazing Woody Allen,  and the writers of the later darker segments --- including all those terrible lies and slanders --- the amazing Coen Brothers and Quentin Tarantino.

They are all amazing writers!

And of course, you cannot say enough about our amazing director Alejandro G. Iñárritu!

And finally, thank you to the American people ---I love you all! --- for contributing the ending of Presidential Psychopath in which all of you amazing people catch on to the maniacal plans of the fictionalized Trump just before March 15, 2016, and 300 million people rise up to beat the amazing daylights out of him!

And oh yes, one more thing.

The only thing that was true about my bogus campaign?


I do have one AMAZING dick!

I'm a little disappointed. My money was on Contact: a story of Phlegm. Amazing movie, and even though I'm not a professional actor, I did hack up some amazing wads of mucus for the camera, and there were some great lines by the supporting cast like "God Bless You" and "Geshundheit" when I sneezed directly in their faces. And thanks to my co-writer, the amazing Perry Block, for landing the Kleenex sponsorship of the film.

Yes, I loved the Phlegm movie too and I think the Academy has a serious lack of diversity in not recognizing movies about Phlegm, not that I can think of any. Well, there should be more. In any event, I'm looking forward to our collaboration next year on Contact: A Story of Smegma. It's going to be a great series of films!

Yes, we'll be right up there with the never-ending Star Wars saga.

Perry-Russell films specializing in the obsurd and ridiculous. Hey can I be your medical consultant? Btw I'm back in the US with Internet so I will be able to harass you both.

By all means you can be our medical consultant, but first I have to know how much you know about phlegm.

I can learn. Do you think Shonda Rhymes went to Med school? Besides I'm an Irish Catholic so we would get diversity credit from the academy next year.