The Strange Man in the Blue Uniform 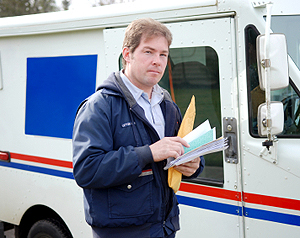 I just can't figure it!

I don't understand it.

There is a strange man in a blue uniform who comes to my front door every morning and leaves papers on my doorstep so that when I open the door they are right at my feet.  Several times I have almost tripped and broken my ass!

I don't appreciate this.

I believe the strange man in the blue uniform comes to my doorstep every day except Sunday. I guess he's a gentile.

Once or twice I have looked through the various papers the strange man brings. Many of them are magazines I don't even read.  I mean, National Geographic? I haven't seen a National Geographic since I was taking them into the bathroom with me after school when I was ten years old in 1960.

There are also odd folded-up pieces of paper with the names of businesses on them and colorful stickers attached with pictures of people like Abraham Lincoln or Elvis Presley.  Is this supposed to be advertising?  I mean, who thought this up? The guy who thinks John Lennon's iconic "All You Need is Love" belongs in a commercial for eye drops with Jennifer Aniston?"

So I recycle all these papers as soon as I get them.

I mean, who developed this font?  The guy who designed Windows 8?

Next I noticed for the first time that you can open up these pieces of folded-up paper, and after twisting and turning it for about ten minutes another piece of paper slid out. When I looked at what was on the second paper, I couldn't believe my eyes!  It was kind of like an e-mail except instead of the normal "Hi, Perry," it began "Dear Perry."

The second paper contained a document in the same goofy font as on the front of the folded paper which said it was from my Aunt Ida, whom I haven't seen in many years, and read something like:

All the relatives from our side of the family have passed and I want to leave my palatial estate and extensive financial holdings to you as someone I loved as a child.  Please let me know that you are still alive and well and can accept this bequest as the doctors tell me it may be any day now.

Really?  True, Aunt Ida did have a palatial estate and enough money to choke Donald Trump, but she was a simple woman who could never have put such a complicated assembly of folded-up paper together.

I mean, who designed this contraption?  Rube Goldberg?

So I recycled it. But I had to wonder why the strange man in the blue uniform would create something like this and leave it on my doorstep? Is this how the pervert gets his jollies? And how did he get Aunt Ida's name anyway?

I know I should approach the strange man in the blue uniform about this particularly odd piece of folded-up paper.  But to tell you the truth, I'm a little scared to confront him.

How do I know he won't go postal on me?

Hi Perry! Love everything about this piece. I wonder if Jan is local. Hope all's well. I'm going to keep reading; It's been a while. - Eve

Hi, Eve! Thanks for writing. I continue to be about as popular as matzoh at a Trump rally. Hope maybe we'll see you again soon.