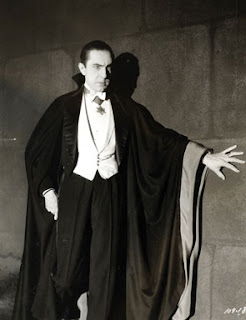 Yes, it will be my pleasure to poke you!

But what if Dracula were written today?

Jonathan Harker @HarkMan
On train thru Carpathian Mts.  Peasant women here look pretty except when u get near them, they all look like actor Jonah Hill in a babushka!

Jonathan Harker @HarkMan
On coach to Borgo Pass.  Odd; other passengers outdoing one another  pointing at me, clutching throats, & making gagging sounds!    Woohoo!

Jonathan Harker @HarkMan
Have arrived at crumbling old Castle Dracula. Place could use work.    Nothing that a coat of paint & 6 wrecking balls couldn't  cure! #WhataDump

Jonathan Harker @HarkMan
Starting to think visiting Dracula may turn out to be as much fun as attending same-sex wedding w/ Justice Scalia!  :-(    :-(    :-(

Dracula@Fangsalot46
Woohoo, I luv Twitter!  I have over 17,000 followers. Of course, most of them follow me with torches, pitchforks, and pickaxes!  LOL!!!  :-)

Dracula@Fangsalot46
How about giving me a retweet on that one, @HarkMan?  I get more RTs than Kim Kardashian's bare ass ever did!  #AskTheNearestZombie

Dracula@Fangsalot46
WOOT! The Childen of the Night; What music they make!  Wait,  I'm sensing a boy band here ....  https://en.wikipedia.org/wiki/Backstreet_Boys

Dracula@Fangsalot46
Make yourself at home,@HarkMan! Tomorrow there will be breakfast, and since this is Twitter, with bacon & copious amounts of coffee!

Dearest Mina.  I must now communicate via Facebook because the Count is a Tweethead! What's worse, he LOLs his own jokes and insists I give him RTs! Dracula is a bizarre diseased creature who recoils at the sight of a crucifix, casts no reflection in a mirror, and roots for the Phillies!  Oh, Mina, please comfort me by posting a picture of Pedals, our adorable kitten!

Of course, dearest Jonathan! Here is  our sweet Pedals, all dressed up like a vampire from last Halloween! 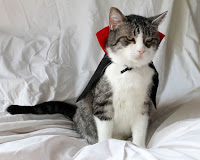 Jonathan Harker
Mina, remind me when I get back we have to talk about our relationship!

Mina, the count is an ardent Facebooker too! I must now communicate through LinkedIn.  Nobody but nobody uses LinkedIn, especially people who want to get a job.

Good Evening, Mr. Harker! Note that I have already endorsed you for European travel, real estate development, and Deliciousness! I am afraid you are out of luck now with social networks, unless you want to use JDate!

This is brilliant, Perry! ROTFL!

Fangsalot46, Anne! Gee, I forgot to use ROTFL. Gonna go back and put it in.

What's that on Harker's face, mold? I'm not sure it's safe to take a bite out of him. Dracula might get something that wouldn't wash off with soap and water.
That Mina Murray does look like quite a dish. She should have had the leading role instead of that moldy Harker.

I have found LinkedIn to be pretty worthless too. I joined one of their writers group and now my inbox is bombarded with worthless emails.

LinkedIn is perhaps the biggest horror of all in Dracula 2015. All those meaningless endorsements keep coming and coming and they don't stop and you are giving them too because they are expected and yet they are meaningless and you get more and give more and ... AHHHHH! Knew I'd find a little geniune horror here.

Dear Perry, I am shocked that you delve in Dracula's shenanigans! You should know, he is untrustworthy. He doesn't call when he's supposed to and his last box of chocolates tasted like they were 50 years old - well - maybe they were. Stay away from him Perry! Nan

I'm always looking to delve into shenanigans, Dracula's or anyone else's. And I think his chocolate is more like 500 years old, but I never pay attention to "Better if used before" dates anyway. Thanks, Nan!