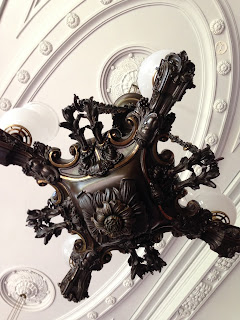 "Look, up above!"cried the audience members at the Paris Opera House. "It's the Phantom of the Opera swinging on the chandelier!"

"Please, Mr. Phantom, don't drop the chandelier upon us!" shouted the people in the audience. "Many of us have families.  This being France, many of the men have two families!"

The Phantom stopped rocking the chandelier, regarded the audience below, and spoke.

"Folks, I mean no harm. I'm just here to stop them from putting on this godawful Phantom of the Opera musical, I'm so sick of it!"

The audience gave a sigh of relief.

"Everybody, my wife Christine has cooked up a spread for us down in our cave beneath the Opera House!  Join us; she makes one mean Jewish apple cake!"


So I cleaned up the Phantom legend a bit in this offering for the Friday Fictioneers based on the picture prompt above! Hope you can join us at Erik and Christine's for some Jewish apple cake. No mater how bad it might be, it's gotta beat having a chandelier dropped on your head!
Posted by Perry Block at 1:12 AM

Lol, if he's sick of it, how about the poor musicians who have to sing the same songs night after night? That Jewish apple cake sounds good. Have you got the recipe?

Yeah after 100 years the Phantom probably needs a change. Maybe an interpretive dance?

Nice take on the prompt

Two families! LOL ... That is what I love about you, Perry. You keep us laughing.

Ha! Clever and funny story, Perry. Given his motives, I suspect his identity could be nearly impossible to determine. Nicely done.

No, only the Phantom has the recipe. Unfortunately he keeps it under his mask.

Or a good stand-up comedy act live from above the Opera House.

Thank you! I try.

Thanks, Mike, but judging from the response I could use a few more laughers.

I think he goes by the name of Clark Kent, if I'm not mistaken.

As you've probably heard, here in Arkansas we only have one family, Perry. It's easy keep up with the family tree when you don't have to worry about all those pesky branches.

I watched the video and that phantom guy looked a lot like my cousin/brother/uncle/grandpa Cletus, except the phantom's dental work was better.

Save me a slice of cake, would ya?

Of course. And one for Cletus too.l

Thanks! Thought I'd give it some added local flavor.

Oh, this chandelier prompt would not be complete without the Phantom making an appearance! Well played, Perry. I bet he is sick of it already. Very funny, as always :)

Actually he was kind of flattered at first. He just didn't like all the goofy looking actors playing him who didn't convey his true handsomeness.

I can relate to the phantom's state of mind. Even I get tired of the same songs being played often.

Cleaned it up indeed! I always love the spin you put on things, Perry. Makes me laugh and think... I know, a deadly combination. ;-)

Ha.. I would think that a dinnerparty at the basement is much preferable to the Phantom of the Opera.

Yes, and for his great hospitality, I told the Phantom to drop in anytime.

I wasn't that fond of The Phantom of the Opera to being with, although I do like some of Andrew Lloyd-Weber's other shows. But my God, the show's been running since the original phantom was alive!

Thank you, Dawn. I wish it made me think. Or laugh, for that matter!

Well, that depends on what the Phantom is serving. If it's rubber chicken with eye Lon Chaney, I'll pass.

Then get set for a totally new take on Jesus Christ, Superstar coming soon!

Great take on this one - I was sick of the 'phantom of the opera' the first time I saw it - too scary for me! However, the Jewish Apple-cake, and Rochelle's Lokshen Kugel sound yummy!!! I always enjoy your humor. :)

I just didn't think it was all that good and the music not his best. Guess I wanted Lon Chaney or Claude Rains. Thanks for your kind words, wish I could clone you into a couple thousand more folks who feel the same!

Dear Perry, Well, you made me snicker again with a smile on my face I'm writing a reply. If you every pry the recipe off of his face mask, make me a copy - sounds delicious! Have a great week! Nan

And when Erik pulls off that mask, that's when the fun really begins!

Thanks, Nan, but frankly it's the face that's important, not the recipe. I'll make you a copy of that!

You made me hungry mentioning Jewish apple cake. I'm glad to see the phantom happily married. I was worried about him. Funny story, Perry. :D --- Suzanne

I knew he'd win Christine's heart over time. Either that or eat it. Thanks, Suzanne!