Man on the Cusp II 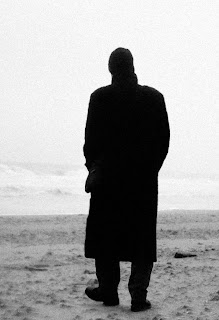 I have gone over the cusp of an age I always thought was exclusively reserved for people’s parents.
Once I wrote that I was on the cusp of such an age, but that was three years ago. There's no question I've crossed over the cusp because when two times your age is 126, it's kind of hard to argue you're in midlife. Plus I felt a major jolt when I rumbled over the cusp a few miles back.

When I was younger, I thought old people were totally cool with the concept of getting older. They felt they'd finally achieved the age they were always supposed to be. When they'd be shaving in the morning and looked in the mirror and  saw Larry King, they'd point at Larry King, give a wry smile, and make that  satisfied click-click sound people make with their tongues at the side of the mouth.

"Yep," they'd say "that's me!  I sure do look my age, which is great!  I'm worn out,wrinkled, bald, and with absolutely no chance of attracting anything less than the scurviest of women on the planet!   It's all as it should be."

But none of that is true!  Inside we remain 30 forever.  My outsides may look like Abe Vigoda decaying from exposure to Strontium 90, but inside I'm Ryan Reynolds. Or Ryan Gosling, I'm actually not sure which is which.

Ever look at a very old couple ---say 85-90 years old --- sitting together at dinner at a restaurant? You probably think "my, that's charming!"  Trust me, it's not.  The old boy is thinking "who the fuck is this prune danish I'm sitting next to?! And why isn't the hot young waitress groping me under the table every time she brings the cheese rolls?"

I always knew of course that these days were coming, but I didn't expect them to come at the speed of the drop in President Obama's approval rating. My whole life feels more like a montage than a continuing and fulfilling process over time. And it isn't a montage whereby at the end crowds are cheering for me and handing me roses and champagne. Frankly at the end of the montage I'm sitting in the living room with the clicker going "y'know, this is sort where I came in."

So what's a bummed out Baby Boomer to do?

I've distilled it all down to a few major goals.  Hopefully you'll see them all realized in next year's edition of the montage.


1) I will live in the moment, as long as it's somebody else's moment.

2) I will never shrink from a challenge.  I will only shrink if somebody has put me in a dryer.

3) I will realize that the only thing I have to fear is fear itself, and all the scary ass things that cause fear.

4) I will be kinder to those people around me.  Those people  above and below me I'm gonna fuck over.

5) I will do something to benefit and enhance the Jewish people.  I might have to convert to another religion.

6)  I will say the "f" word much less.  It only cheapens discourse, bringing everything to a lower level.  However, I will write "fuck" much more often.

7) I will be kind to animals, realizing they are all God's creatures.  But he's not gonna get my dog!

8) I will try to put all my regrets behind me. Then I will turn around and go through the rest of my life backwards.

9) I will never again whine about what comes to me. I will just generally whine.

10 ) I will use my time well, except when Duck Dynasty is on.

Oh, and one more thing.

I've got a year on you, Perry, and I've got to say that had I known the 60s were going to be this great, I would have skipped a couple of decades to get here sooner. Of course, it helps that I'm healthy and on a good day, with proper makeup and lighting, hotter than ever. ;)

Perry my man. You gave me the laugh I needed this morning. Thank you! LOL!

You ARE hotter than ever, Jayne, you cougar you!

Have a great year yourself ...

Thanks, Lily, even though you are nowhere near the cusp!