A Not So Wonderful Life Anymore 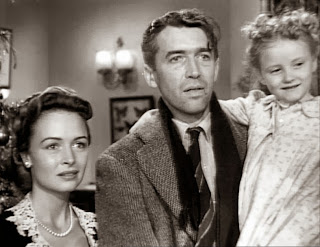 Mary, Zuzu! They're sick of us!

If you are truly strong-willed and stout of spirit this holiday season, you will manage to avoid watching even a millisecond of one of the greatest and most popular movies ever made and a movie I'm sure you love and cherish, Frank Capra's 1946 classic It's a Wonderful Life.

A few years ago when it was still in the public domain, It's a Wonderful Life was shown on virtually every television channel on the viewing spectrum except the Whips and Chains Network.  It was shown in black and white, color, upside down, with captions for people who like to brag about how much they read, and in a specially processed version in which George Bailey is rescued not by Clarence the Angel but by Iron Man.

It was actually possible to race It's a Wonderful Life by switching back and forth between different channels showing the movie. Which of the versions would end first - one of those on non-commercial cable or PBS or one with commercials but with a good half hour to 45 minutes head start?  And you could also readily switch to a channel  lagging seconds behind the one you were watching and get an instant replay; "here's the action once again, fans, as Uncle Billy screws up and hands the money to Potter!"

But even if you missed that era, you've still seen the movie enough times to know all the words to "Buffalo Gal, Won't You Come Out Tonight," laugh about the names "Bert and Ernie," and do a fair to middling impression of George Bailey shouting out "Zuzu's Petals!"

So why do you keep watching a movie you deeply love but are so manifestly sick of?  This year you won't.  This year you're going to fight it!

First: Check the television listings for the two times that Wonderful Life is going to be shown on NBC this year. Be nowhere near a television set or any other electronic device when the movie is broadcast, especially when the Clarence sequence is on. Don't be seduced by that unbridled Capraesque sentimentality any more!

Keep in mind this movie has its creepy aspects too:

"You're not going to like it, George. She's an old maid; she's about to close up the library!"

And "No man is a failure who has friends?"  Hitler had friends; what are we to make of that? You and I have friends and we're not exactly indispensable to the Great Chain of Being. Chances are if Clarence took us around to see the world as it would have been if we'd never been born, it would have been pretty much the same, if not better.  Probably way better.

Finally, if all this doesn't stop you from sliding into yet another viewing of the most loved/hated movie of all time, imagine that Clarence the Angel is showing you what your life would have been like if Frank Capra had never been born.

Doubtless countless productive hours would have been saved not watching It's a Wonderful Life!

Well, I don't happen to have a hilarious spoof of It's a Wonderful Life, but I do have the mediocre one I did a few years ago.  Here's Potter Strikes Back!, directed by Perry Block, 2011, with an all-star cast you have to imagine are actually performing.  It makes up for its mediocrity with length.

Please do not throw popcorn on the carpet.

Hi Perry,
I'm thinking about how sane my life would have been if you had never been born. I won't be watching that movie again this year. Much too sappy for an old cynic. Instead, we will indulge in our own Christmas movie tradition, once again letting our hearts soar as we view Bad Santa. If you're truly sick of IAWL, and Potter Strikes Back, II suggest the sequel, made by one of Capra's illegitimate sons, It's A Wonder You're Alive, in which Mr. Potter becomes a daredevil in a circus after being ridden out of Bedford Falls on a rail. Of course, there's always the porn knockoff to watch as well, It's A Wonderful Muff, but if you watch that one, don't do it on Christmas Eve or you might get caught by Santa and put on the naughty list. Ron

Ron, How dare you write a comment that is funnier than my post?! Frankly I think my life would have been a lot better if I had never been born, but it being I'm here, my fondest wish is to at least watch the Clarence sequence with you and watch you sob uncontrollably. Everyone does the first hundred or so viewings.

Of course as good as that movie is, Potter Strikes Back shatters all misconceptions that a sequel cannot be better than the original (or at least shorter than the original, especially if you skip over the unfunny parts.) Please tell me that It's a Wonderful Muff does not feature Donna Reed just as she's about to close up the library. Not that I wouldn't still watch it. Along with Santa, I'll bet. Thanks for commenting, Ron!

No way to follow any of that with a comment that's in any way clever. But you'll be glad to know we'll be watching "White Christmas" and "Elf", a combination bizarre enough even for you.

I used to love White Christmas until I got old enough to realize how silly it was. Incidentally I just learned that Bing Crosby thought the same thing, that the music was great but the story and script were weak. But I've always been a little in love with Vera-Ellen and would have died to sing "Sisters, Sisters" with her. As for "Elf," it's funny enough, but I'm one of the few people who thinks Will Ferrell is (sacrilege) overrated.

Oh, and thanks for writing, Janet!