Next on Nova: Murray's Universe 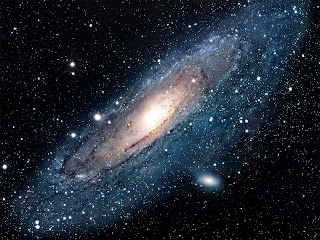 It's a question that's been asked from the time humankind first began to ask questions. Where do we all come from? What is the origin of the Universe? And is it even halfway as cool as the origin of Batman?

Now startling discoveries suggest that previous theories about the beginnings of the Universe may have been empirically inaccurate, or to use the scientific term, cuckoo banana doodles!  Is all life in the Universe nothing but a dream? It's " Murray's Universe," Next on Nova ...

For years now, the Big Bang has been the prevailing view of the beginnings of our Universe.  But it is a theory riddled with flaws, such as how could Higgs-Boson particles have collided 15 billion years ago and exploded into the creation of the Universe when neither Higgs nor Boson were alive then to name them?

Dr. Lance Lewitsky  of the University of Havertown PA is an eminent astronomer who has studied the heavens for over 25 years ever since he first realized that if he became an English major the hottest chicks he'd ever be able to nail were spacey lit majors from Sarah Lawrence who'd be nonstop gassing him about Emily Dickinson.  Through the use of one of the world's most powerful telescopes, he has made a game changing discovery.

"When we look through a telescope, we are actually looking back in time. With this telescope, I can look back almost to the birth of Joan Rivers! There deep in space I have seen a floating shape that when magnified several thousand times appears to be that of a big fat guy sleeping. We have named him Murray, and we believe that he is dreaming the entire Universe!"

Here is the best enhanced image we have of Murray, and yeah, I know exactly what you're thinking, ladies and gay men worldwide, but keep in mind nobody's asking you to have sex with Murray, just to be housed within him."

The so-called Row, Row, Row Your Boat Theory, says Dr. Lewitsky,  explains a great deal we've never understood before.  Why is there  evil and injustice in the world? According to Dr. Lewitsky, Murray is a bit of a jerk.  Why does your spouse look like a female version of actor John C. Reilly? Murray hates you, explains Dr. Lewitsky.

And why are there earthquakes, tsunamis, and other natural disasters? Dr. Lewitsky's calculations indicate Murray rolls over a lot and snores like a son of a bitch!  One has to feel sorry for anybody he might be sleeping next to.

But who is Murray? Where is he from? Is he Jewish? Why couldn't we be dreamed by somebody lots cooler like a guy with a dashing mustache and an eye patch named Count Maximilian de Boisier?

"All these questions yet beg for answers, and frankly you're kind of annoying me now. What we do know for certain is that Murray began dreaming our Universe about 6,000 Earth years ago and dreams in creationism.  He actually believes everything's controlled by some imaginary superhuman being on a mountaintop with a long white beard and doesn't even realize he's DA MAN!"

Of course, the most important question of all is: What happens when Murray finally wakes up?

"When Murray eventually awakens, it's postulated that the Universe will implode, mountains crash into the sea, and in an immense ball of gaseous fire and destruction everyone and everything  will perish for all time!   So please, folks,  SHHHHH!!! "

What's next for the Row, Row, Row Your Boat Theory?  Dr. Lewitsky has recently begun a project to study possible methods for influencing the happenings in Murray's Dream.  If successful, such an endeavor could have stunning, immense, and sweeping implications for the future of all of humankind!

And you and I might be able to induce Murray to dream we are fucking Scarlett Johansson.

Next Time on Nova:  Scientists today are exploring new ways to reverse climate change by undermining the climate's confidence and convincing it that change is always unpleasant and way hard.  "Fucking with Climate's Head," next week on Nova.

If you liked this post, you might also like Next on Nova: Whatever Happened to the Dinosaurs?,  Next on Nova: The Artist Dimension,  and The Mystery of Adnan and Evie.  If you hated this post, I hope you are just about to have sex with Scarlett Johansson and  BAMM!
Murray wakes the hell up!

We can always count on the scientist of Havertown to postulate great theories. The ability to look back almost to the time of Joan Rivers birth is both shocking and scary. Murray reminds me of a younger version of myself. In with case, I must have just dreamed this entire post. Hopefully, I'll wake up in time to have sex with Scarlet Johansson.

Yes, unfortunately medical science cannot look all the way back to the birth of John Rivers but we do have a enhanced images of you reading Murray a bed time story before he nodded off.

Scarlett Johansson is rumored to be very excited about this!

In response to the reckless bandying-about of her good name, Scarlett Johansson wishes to be quoted as paraphrasing Hammie MacPherson of "Baby Blues": "BLAAAAAAATT!" (Uttered with mouth wide open and tongue protruding.)

Now you're talkin', V.B., at last Murray seems to be coming around. He must actually like you!