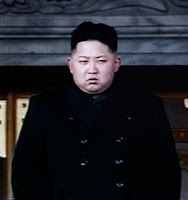 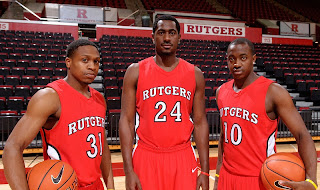 In a bold diplomatic masterstroke, the crisis in the Korean Peninsula has been solved!

"I am elated at being offered this fantastic opportunity," said the new coach of the Rutgers men's basketball team, North Korean strongman Kim Jong Un, speaking through a very uneasy interpreter. "Coming to America has been quite an experience;  they have so many incredible technological marvels here such as a change of clothes and food.  I'll have to see if I can work them into our next five year plan."

The new coach plans to ignite the team with a strategy based on winning through intimidation. "Kim will focus on several key plays as mainstays of his offense," said close friend Dennis Rodman in between continuing desecrations of the human body, "including the nuke and roll, the ka-blam! dunk, and the full-court half-baked press."

"And you can be sure," Kim added, "unlike my predecessor, I'll be careful not to do anything stupid."

Excellent hire. Makes me wish we had an opening at Arkansas. I'm not sure how Kim would look in overalls, but at least he wouldn't have to worry about looking stupid.

Since this announcement, several teams on the Rutgers schedule have already called to forfeit. It's amazing how quickly this guy can a struggling program around.

I understand all states neighboring New Jersey are evacuating their populations as we speak. Or at least evacuating their basketball teams.
Thanks for commenting, Russell. As always, I appreciate your support of my writing!