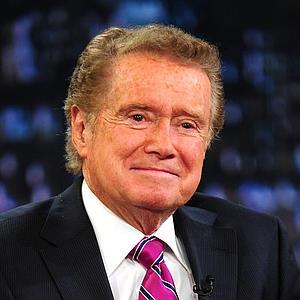 Hail to the Chief!

If you've been anywhere near a television this entire week, you know one thing:

The next President of the United States should be
Regis Philbin!


And I am today announcing that I am the volunteer head of the newly-formed  "Committee to  Draft Regis Philbin For President of the United States - 2012!"

Here's why Regis is the most qualified person in the nation to be your next President:


1) America loves him!  You've seen it all:  Regis is a combination Joe DiMaggio, Harrison Ford, Astronaut John Glenn, George Clooney, Beatles, Elvis, Lady Gaga, Batman, Scarlett Johansson, {insert whoever you think is really cool here but it's probably Regis anyway so don't bother},  and of course,  Justin (Beiber and Timberlake!).  He is all things to all people.

3) You can't help but like him.   Think Ahmadinejad could resist the Regis charm?


"Gelman!  Gelman!  Pull up a chair for my friend Mahmoud!   Mahmoud, we don't want to go out of control!  You don't want nuclear weapons,  Mahmoud,  what you really want is a night on the town in New York City with Kelly Ripa!"

4) He knows how to work with vice-presidential types.  And if he could work with Kathie Lee Gifford,  he could easily handle Dick Cheney.

5) Gridlock?  What Gridlock?  Regis could bring Demi Moore and Ashton Kutcher back together by 9:07 including a commercial break.  Don't be surprised if  Congressman Barney Frank and Newt Gingrich aren't next!

6) His wife Joy would  make a lovely First Lady.  As she's demonstrated from her countless televison appearances, Joy Philbin is poised, intelligent, and at 70 still even  a bit hot.  And if anything should happen to her, Kathie Lee would lose no time leaping in to fill the void!

7) He appears to still have pretty good hair.  America will never elect a bald president other than one that was more or less responsible for winning World War II.  Regis' hair looks darn good for somebody his age, and if it isn't all his, who the hell cares?

8) He is a friend to the Jews.  Gelman and Joey Bishop, to name just two.

9) He's worked with many beautiful women over the years.  Who knows?  Maybe Regis could help us older guys get chicks!

Just a minute, folks, I think I hear Regis calling me!

Nah, he was just calling for Gelman.

Which is a good thing!  Because, folks, I have an awful lot of work to do and ...