News on the Radio 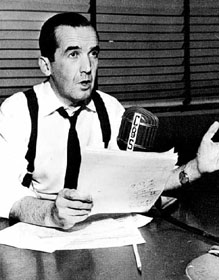 Goodnight and Good luck .... and you'll need it!

I'm really proud of my son Brandon.  He and a friend have recently begun a once-a-week  program on their high school radio station discussing national and international news and current events.

Naturally to get the program up and running, he turned to his dad for advice. As Brandon realizes, I am an experienced blogger for whom a life-long interest in history and world affairs has been, well, something of a major passion!

"It's your first show today. Don't you have any questions or stuff you want to ask me about?"

"Not really, Dad.  We're good to go. We're leading off with the latest on the Syrian uprising."

"Well, that's very good, of course," I replied,  proud of Brandon's knowledge of what's going on in the vitally important but troubled region of the Middle East.

I'm pretty sure that's where Syria is.

"But you want to make sure you've got the domestic issues covered too," I said. "Like Occupy Wall Street."

"Sure, Dad, we're doing that," said Brandon.  "We've got some pretty good analysis on both sides of the issue, including the need for the protesters to speak with a more precise unified voice and for conservatives to try to understand the frustrations that have sparked the protests."

"You were following that girl you thought might be Peggy Lipton from The Mod Squad all the way from the Washington Monument to the Lincoln Memorial and you hooked up with that stoned guy who kept getting Coretta Scott King confused with actress  Loretta Young?"

"Half dozen times or so."

"Dad,  we've got it all covered.  We're also going to be talking  about the debt crisis in Italy and strategies the new prime minister there might implement to handle it."

"The new prime minister?!!  What happened to the old guy with the hookers?!!!"

"They threw him out.  The new prime minister is an economist who may be better prepared to tackle the nation's problems.  Oh, gee, look at the time!"

"Brain farts? Like with Herman Cain and Rick Perry?  Why would I have a brain fart?"

"Dad, why don't you just listen to the program today?" said Brandon.

"And if you like, when I get back, we can discuss any questions you have!"

My favorite post so far. I hope you listened to it!

I always listen to Brandon, if that's what you mean.

And I always listen to you too! Loretta Young, not so much ...

The radio seems like a novelty to young people today. I sometimes prefer to listen to TV. I'm glad Brandon is working with this audio medium. Last week, some of my colleagues were discussing the possibility of an old transmitter waiting for them in a dusty attic somewhere in this small town.

I think radio will always exist but its identity will change with the times, as when it shifted to a mostly music format and away from radio plays, celebrity programs (such as Jack Benny), etc. upon the advent of television.

Hey, that was kind of an intelligent comment! If only I'd said something like that to Brandon ...

Cute. Hey, if radio seems like a novelty to the teens, maybe they'll do something creative with it. Your offspring sounds delightful.

That is, avoiding his dad's example as best he can ...