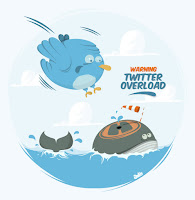 Yes, Twitter brought you your own little window on the world in 140 characters or less. Suddenly obscure little you became a major league player in the worlds of politics, world affairs, entertainment, and looking at mangy cats. You mixed and mingled with interesting and exotic people from around the world who, were they to have met you in person, would never have deigned to mix and mingle with obscure little you at all.

But gradually there have come to be issues. Every time you receive an RT you do a victory lap around the room and high five your stuffed bear. You send birthday presents to everyone you are following on Twitter including @KimJongUnDude. Lately as you spend even more and more time on Twitter, you need to be regularly re-introduced to those two diminutive people who live in your house named Kristin and Timmy.

It is close to the breaking point.  Here are:

10) That huge emoji overhead when you go outside?  That's the sun, asshole!

9) You follow everyone that Twitter recommends you follow even if their profiles include the words "Proud Craigslist Stalker," "Conspiracy Theorist Who Believes You Killed John F. Kennedy,"or "Republican."

7) You are convinced that Kim Kardashian is tweeting just for you!

6) You frequently use the hashtag #HELPMEOMGPLEASEHELPME!

5) Can't get enough dick jokes even if they're just about a guy named Dick.

3) You are fuming that you flunked the tryouts for Team Follow Back.

2)You type LOL after every one of your tweets, even if they're about economic infrastructure and agrarian land reform.

The only one that applies to me is number (4)

I keep getting emails telling me to confirm a Twitter account that I didn't know I had or ever requested. I assume you're the one who signed me up so you could increase your total following to four. Well, I'm not that easy, Buster. And BTW, the only one of the Kardashian clan that's tweeting just for you is Caitlyn Jenner.