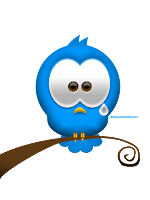 It's true. Whenever a celebrity or dignitary wishes to express his condolences, grief, or appreciation regarding a colleague or friend who has passed away anymore, he or she does it via Twitter.

Many of us, however, remember a time when people had to come forward and appear in public to express their feelings upon the death of someone who mattered to them. In those days you actually saw and felt true emotion and the impact of loss.

It's kind of not the same when bereaved individuals can tweet how upset they are while sitting on the crapper. And frankly, the rather childish word “tweet” doesn't have sufficient gravity to convey emotions as serious and important as grief and sorrow.  If you can tweet your grief, shouldn't you also be able to twinkle your condolences or bebop your angst?

Apparently in the very near future, you can.

"I am greatly saddened by the death of my dear friend Harry Truckman," President Donald Trump merrymounted today on the social network Merrymount. "All of us owe Harry Truckman a great debt for his stellar service to the nation," President Trump additionally tweeted as well as flamboozled on Flamboozle.

Praise for Harry Truckman was tweeted, merrymounted, and flamboozled from round the world.   "Michelle, Malia, Sasha, and I are truly distraught over the passing of our friend Harry," flamboozled former President Barack Obama, with whom Mr. Truckman also served.

"He was a man of faith and principle,” deedled Pope Francis on the official Vatican social network Deedledop, and Queen Elizabeth flamboozled, merrymounted, tweeted, and deedled her condolences as well.

It was Mr. Truckman's widow, Mrs. Mary Truckman, however, who best summed up the feelings of the nation Harry Truckman loved:

"There will never come another like him this way again," Mrs. Truckman gigglefarted on Gigglefart.

This post is a re-working of an earlier version of Fare Thee Well, We Tweet to remove some relatively stale social references.  The subject manner, however, remains as fresh as the day it was written!

As does its lack of popularity with readers.

Thoughtful and beautifully written, as always.