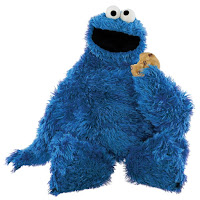 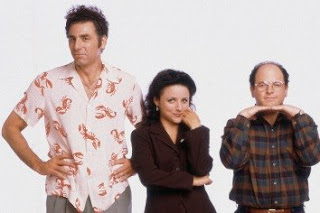 Very few people remember it today. In fact it's been called "The Lost Episode of Seinfeld," primarily because it has been lost, and a great deal of effort has been put into keeping it so.

Sometime in the mid-nineties Jerry Seinfeld took ill for several weeks. Rather than close down production, Larry David decided to go ahead and shoot an episode with another actor in the role of Jerry. Cookie Monster lobbied hard for the part and nailed it, mostly because he was sleeping with Julia Louis-Dreyfus at the time.

Although the full episode is lost, I have secured a clip.  Enjoy (kind of)!

The Scene is Jerry's Apartment

George: Hey, Jerry, I wonder how Elaine made out on her blind date. What's the deal with blind dates anyway? Are the dates actually blind or do you just generally wish you were blind when you first see them?

Jerry: Me not know, George.  All me know is me want cookie!

George:  So, how was the big date tonight?

Elaine: Turned out he was really handsome with an athletic build, a great sense of humor, and a head full of thick curly brown hair.

George:  I think I must have missed the "don't ask" part in there somewhere!

Jerry: Me guess he has a real terrible job like he live in a trashcan and shouts mean things to everyone who goes by!

Elaine: No, he is a partner in a big corporate law firm on Wall Street.

Jerry: Well, then, me bet he can afford a lot of cookies! Om nom nom nom!

Elaine:  We went to the Soup Nazi for some lobster bisque.  I told him to be careful with what he said, but he mentioned the word "debenture."

Elaine:  The Soup Nazi thought he said "denture!" The Soup Nazi must have them from the way he reacted, and he banned my date from soup for life!

George:  Well, that's too bad but that doesn't have to ruin the relationship.

Elaine: A boyfriend I can't go for soup with at the Soup Nazi? Are you kidding me? That's almost as bad as a boyfriend without a penis!

Jerry: Actually it worse. On days Soup Nazi has cucumber soup, no penis no problem at all!

George:  Who would buy that?

Jerry: What am the deal with neckties anyway? They just hang in front of you, don't do anything, and always get stained with mustard sauce. Unless you eat cookies only, which do not stain!

George: Guys, we're trying to help Elaine! She's got a boyfriend that the Soup Nazi completely shut down.

Jerry: Y'know, Soup Nazi give me no trouble.  He sense me not desperate since soup no big deal to me, unless it cookie soup.

Elaine:  Hmm, that gives me an idea.

Elaine and her boyfriend are in front of the line for soup.

Soup Nazi: All of which get stuck in my dentures!   No soup for you!  And for anybody who knows you!

Boyfriend (to Elaine):  Looks like I blew it again, Elaine.

Jerry:  Me back again!  Me really want cookie bad but ... me take lobster bisque as second choice.

Soup Nazi: Didn't I give you soup once before, little blue man?

Jerry: Yes, that am right!

Soup Nazi: You're the one who started this whole cookie thing! No soup for you!

Jerry and George do a double take.

George:  Jerry, I'm not even going to go up now!  I'm going home and figure out the Opposite of what I'd normally do and try that.

Soup Nazi: Kramer! Come right in!  What soup do you want today?

Kramer: Oh, a little of the minestrone, some lentil, and a big bowl of lobster bisque.

Kramer:  You know, I was wondering.  Does anything in these soups ever get stuck in your dentures the way cookies do? Like chocolate chip, oatmeal raisin, and Oreos for example.

Kramer takes his soup outside to eat and the others, totally amazed, follow him.

Jerry: How you get soup, Kramer, even after you mention cookie?

Kramer:  What's the secret, you ask?

Kramer: You know, me neither.

Soup Nazi:  Either way, it's great!

As noted, this experiment was not repeated again after the ratings for this episode were so low even Jewish people didn't watch.  Jerry Seinfeld shortly rejoined the cast and Seinfeld returned to its former status of pure comedy gold for the rest of its run.

Cookie Monster soon broke up with Julia Louis-Dreyfus and returned to Sesame Street. He didn't do badly there either. But Cookie Monster never again played a character other than himself.

And his dream to one day direct has remained as of now sadly unfulfilled.

That's what they get for casting Cookie Monster. Had they cast you or I in the interim role this episode would have won an Emmy and Jerry would have been out of a job.

I see you more as Kramer, but either way you're right. We're Emmy material, if not Tony material!

Beyond my English understanding, I'm afraid, but clearly a work of art!

Now you're just being nice. My cucumber soup joke has already been condemned by the National Organization for Women, the Republican Party, and Donald Trump.

Trust me; you're best off not understanding it!