The Return of the LOJM 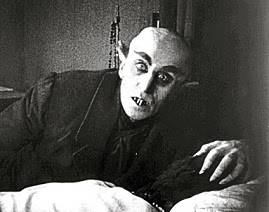 The  LOJM?
Of all the fearsome creatures that walk the Earth, none is more terrifying than the legendary beast known as the LOJM! (pronounced LOW-JIM)

For the uninitiated - as well as the un-Jewish - the LOJM, also known as the "Little Old Jewish Man," is the monster that stalks Jewish males of a certain age. It's evil mission: to convince youthful good-looking sexually dynamic Jewish men that they incredibly appear 60 years old or more!

And to my eternal damnation, I am one of its victims!

Although no one has ever seen the LOJM, it is theorized it looks like a cross between actor Mickey Rourke, the guy at the synagogue who probably knew Moses, and Nosferatu on a bad hair day. Whenever its victim looks in the mirror or has a picture taken, the LOJM leaps at blinding speed in front of the poor victim and completely obscures his handsome young face, replacing it with its hideous own!

And this is exactly what happens to me.  Whenever I try to get a picture taken, my naturally boyish grin, sultry sensuous features, and smoldering sexuality are nowhere to be seen.  In their place is the vile visage of the LOJM!

And even after completing this foul deception, the LOJM is still not finished. Somehow the creature has found a way, perhaps through mass hypnosis , to convince others that the picture actually looks just like the victim instead of like the grotesque distortion that it is!

All of this is of special concern to me because on September 12 I will be having a birthday. I will be 35 years old, the age I always am and ever will be. Someone will want to take a picture, however, and the LOJM will make sure to ruin it all! 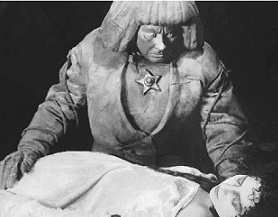 Last year I had a unique idea. It seemed to me that the best way to fight one legendary Jewish creature was with another, so I called on the Golem of Prague. The Golem is a mighty giant constructed out of clay to protect the Jewish people in historical times of trouble, such as when gentiles would seek to force us to eat Jimmy Dean Pork Sausages. Not only would the Golem pound them into guacamole dip, but being a Reform Golem he would also eat up all the pork sausages.

"I cannot help you, Perry," said the Golem. "But next time you're being drawn and quartered by rabid mobs of anti-Semites, ring me up."

"Now that you mention it," muttered the Golem, "I haven't had a decent woodcut made since the turn of the 17th Century."

And so I convinced the Golem to show up at my small birthday celebration. The stage was now set:  one legendary Jew v. another, neither of which was a lawyer or in show business.  It was probably a first.

At the appointed moment, my son Brandon took the picture.

"Say no cheese," he  pronounced, taking into account my life-long food aversion.

At once the Golem leaped high in the air as if to swat the LOJM to the ground, banged his head on the ceiling, and dropped onto the floor.

"No, but I'm pretty sure I'm hemorrhaging Play-Doh."

The Golem and I now crowded around the picture.

"Y'know, Perry, it does look just like you! Especially the dark circles, bulbous nose, and the comb over hair."

"Some defender of the Jews you are, Golem!"  I cried.


And the Golem was gone.

So how about you, Jewish men of a certain age?  Before you know it, it will be your 35th Birthday too (and again), just as it is about to be mine.  And the LOJM will be there, of that you can be assured.  The LOJM will always be there.

Be ready. Be prepared.
Beware the LOJM!

And don't expect much help from the Golem.  Unless you've brought Jimmy Dean Pork Sausages.

Dark circles, bulbous nose, and the comb over hair? Oh, no! So LOJM is really Donald Trump? Now, that is scary.
All we have to do now is find you a LOJW to be your running mate.

I'll pass on a LOJW, please! If women could only see me as I am, I could have my pick of the litter. Right now all I can get is litter! Damn you, LOJM!

At least you have a LOJM's sense of humor. So you got that going for you.

I sure do. And me and the LOJM are one laugh riot as he speeds in front of me and makes me look like Abe Vigoda's father! Thanks, Tracey.