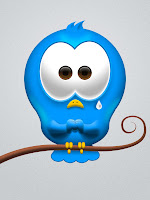 Within the past few weeks, three young television performers sadly passed away and they were duly mourned, as people are these days, via Twitter. They were Corey Monteith, Gia Allemand, and Lee Thomas Young, and though I can't claim to even know who they were, it's nice to know they were given a proper sendoff by those who loved them and cared about them.

Here's just a small part of it:


Now, I'm sure the sentiments expressed by these three on the Twitter are heartfelt; after all, Janet Tamaro  is holding big red fake lips in front of her face and Jake Pavelka is smiling as though even he thinks it's funny he's a hunky guy with a name like Pavelka. But many of us remember a time when celebrities actually had to come forward and appear in public to express their sorrow at the death of someone they cared about. And in those days you actually saw and felt actual emotion and bereavement.

It's kind of not the same when bereaved individuals can tweet how upset they are while sitting on the crapper!

And there's little doubt that new social networks will continue to proliferate.  Soon we'll all be turning to the HuffPost for obituaries very much like:

"I am greatly saddened by the death of my dear friend Harry Truckman,"  President Hillary Clinton merrymounted today on the social network Merrymount. "All of us owe Harry Truckman a great debt for his stellar service to the nation," President Clinton additionally tweeted as well as flamboozled on Flamboozle.

Praise for Harry Truckman was tweeted, merrymounted, and flamboozled from round the world.   "Michelle, Malia, Sasha, and I are truly distraught over the passing of our friend Harry," flamboozled former President Barack Obama, with whom Mr. Truckman also served. "He was a true statesman of the first rank, here, here, tut, tut!" merrymounted and tweeted young Prince George from London, and both of his parents sent similar messages via Flamboozle.

"I feel lousy about poor Harry as well," deedledopped Vice-President Joe Biden on the relatively little used social network Deedledop.  It was Mr. Truckman's widow, Mrs. Mary Truckman, however, who best summed up the feelings of the nation  Harry Truckman loved:


"There will never come another like him this way again," Mrs. Truckman gigglefarted on Gigglefart.

No doubt about it, I gotta get me a Gigglefart account.