If Batman Had a Jewish Mother, or My Son, the Dark Knight 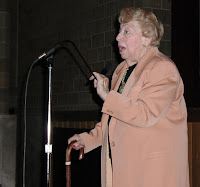 As the scene opens, high above Gotham City, the Bat Signal cuts through the evening sky.

Mrs. Wayne: Come see what I made special for you.

Mrs. Wayne:  You're welcome, darling.  You're looking frightfully thin, Bruce, have another matzoh ball.  Light as a feather, aren't they?

Mrs. Wayne:  I don't see anything. Here I'll close the drapes so you won't be bothered ....

Bruce: No, no!  It's the Bat Signal.  I must switch to my alter ego, the Batman!

Mrs. Wayne: Now, darling, you know you have to wait 45 minutes after eating before you change into Batman. Even longer if you're going to have to swim as Batman!

Mrs. Wayne: Gotham City needs to kiss my tuchas!  And I expect you home by 12:00 sharp or you're grounded!

Mrs. Wayne:  Then I'm coming with you.  Somebody's got to keep Mr. Dark Knight out of mischief!

Off into the night roars Batman's supercharged vehicle across the Bat Cave waterfall and towards Gotham City.

Mrs. Wayne:  Bruce, Bruce, slow down for crying out loud! You'll give your mother a heart attack!

Batman:  But, Mom, Commissioner Gordon is counting on me.

Mrs. Wayne:  Counting, schmounting!  He put a coat around you one night, you weren't even cold and I wasn't even dead! Say, darling, did you remember to bring your inhaler?

Mrs. Wayne: Suit yourself, bubbeleh!  And watch your mouth.

Batman:  Sorry!   That reminds me, Mom, when I'm dressed up like this, please remember to call me Batman!  You screwed up twice last week and called me Bruce right in front of Jim Gordon.

Leaping from a tall building, Batman glides down to confront the Joker.

Batman:  Hand me the detonator, Joker.  I'm going to stop you from destroying Gotham City!

Joker:  But destroying Gotham City is my hobby, Batman.  What do you want me to do,  take up Mah Jong?

Mrs. Wayne: Did I hear my favorite hobby mentioned?

Joker:  Who are you?

Mrs. Wayne: Sure, darling.  Mr. Joker, look at you!  This is how you come to destroy the city? You look like Flo from Progressive.

Joker:  How should I look, Mrs. Batman?

Mrs. Wayne: Go home, wash your face, put on a nice suit, and then turn yourself in to Commissioner Gordon.

Batman: I have to admit you're right, Mom.  But I have a question.

Batman:  Is there any more soup?

Mrs. Wayne: Of course, darling!  Nothings too good for my boy who just single-handedly saved Gotham City from the Joker!

I am sitting here laughing over this insane and wonderful posting. It fits the absurdity of Batman perfectly and it goes into the heart of the matter. Who, in his/her right mind, even at the impressionable age of 10, would believe that no one recognizes dear Bruce just because he puts a half mask on? From day one, it reminded me of Viennese operettas where a husband does not recognize his wife because she covered her eyes during a masked ball... And Bruce's life style, living in his mansion with Robin and a great butler, certainly would be improved by a proper mother who produces matzo ball soup. I will never imagine him again without her shadowing him into the dark night...

Thank you, llil, what a nice comment! It's the suspension of disbelief we have to make to think no one recognizes Batman or Superman, who does it all with glasses only. That said, Batman as depicted these days without Robin would certainly need a little help and who better than a matzoh ball bearing Jewish mother? He's just going to have to keep in mind that changing into Batman in under 45 minutes after eating gives you cramps and it's important to wash behind your ears whether anyone can see them or not. And attend a few Viennese operettas to keep up on masked deception techniques. Thanks, again!

Very cute. I like a Batman who takes his mother along with him.

But I think his alter ego is really Bateman, and it wasn't Gotham City, it was Goyisha City, and they drove the Chanukahmobile, and the Jokester was a real prankster with a lot of shlamazel shlepping Bateman and his meshbucha all over the shtetel like that. Oy!

That was fun.
Randy

Funny! But I think it's spelled "mishpooka," but you seem more Jewish than I am so you're probably right.

Oy. I like that. "More Jewish Than I Am" sounds like the beginning as of a Broadway play.

Yiddish spelling and pronunciations, I think, are different depending on where your family originated from and how many generations have passed since arriving in this county.. Hanukkah must be spelled 20 different ways and may be pronounced at least two different ways - with the spitting CH or the soft Ha.

Now, if she could just find him a nice Jewish girl to settle down with. Hanging out with a teenage boy in tights is a little strange. I think if more young men had mothers like Bruce . . . er, I mean Batman, we'd have less crime in this country.

That does sound like the title of a Broadway play which we should write and make money from. Who can we get to write the music? As for the spelling of Hanukkah, I prefer the soft Ha as in people laughing at my blog, even though what I mostly get is spitting.

Thanks, Joe. I improv-ed it all!

We might have less crime, but one hell of a lot more guilt to deal with. Not sure which is worse!

I just read this out loud to the man in my life, who is a goy. He loved it. So do I.

Thank you, Roz. I really appreciate your support. I remember that your man is a fan of the great comic book heroes from one of your pieces, and I appreciate his appreciation too.

Hopefully we can get together for coffee (but not veggies) sometime in the New Year. Have a Happy One!