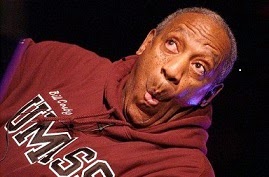 On the set of the cable reality show "Keeping Up With the Kardashians." Kim Kardashian is seen alone in her room.

Kim: This is terrible! (beginning to cry) I was promised they would not show my breasts! Then they print these awful pictures that were meant just for my husband, Usher!

Kim: (crying hysterically) Kanye Whatever!  What do they think I am, some kind of blatant and shameless publicity seeker?!  I swear as God is my witness I will never pose naked again!

Director: And that's cut!  Kim, that was wonderful!  How did you manage to bring out the tears in that scene?

Kim: I thought about the fact that some people in the remotest areas of the four corners of the world have never yet seen my tits, and I just lost it!

Director:  What is it? That beam of light in the sky?

Kim: It's the Ass Signal! To the Ass Pole!

Kim grabs a bucket of skin oil and ducks into her dressing room as she begins to pull down her pants. The scene shifts to the downtown hotel room of famed comedian Bill Cosby, where Cosby is seen with a young model named Samantha.

Samantha: That would be nice, Mr. Cosby.

Cosby:  It's called the Cosby Cock-tail.  It's aptly named.

Samantha: Gee, I never had a bubbling drink like this before.

Cosby:  The drugs! They must be starting to work.

Samantha:  It isn't the drugs, Mr. Cosby, it's your boring totally unfunny monologue. I can't fight it, my eyes are closing!

Cosby begins advancing on Samantha as she falls to the ground.  Suddenly the window shatters and in flies a huge well-oiled ass, with a big red S on its thighs!

Cosby:  What are you doing here, Super Ass?

Super Ass: Your behavior is despicable, Cos.  I've come to stop it!

Super Ass: No, you idiot, I mean getting too damn much attention on the Internet!  Some people are actually posting about you instead of me!

Super Ass: You don't scare me, Cosby! Prepare to die! On the Internet, that is.

Super Ass knocks Cosby to the ground, flies to the sleeping Samantha and snatches her up,  and carries her to safety.

Super Ass:  See, Cos?  Now you've done nothing disgusting tonight. Nothing to post about.

Super Ass:  Next I'll travel into the past and undo every other sexual outrage of yours so there'll be nothing notable about you in 2014 except your liver spots.

Super Ass: Don't mention it, Cos.  Removing a pathetic old pervert like you as a rival in my attempt to Break the Internet is my pleasure!

Super Ass flies into the sky, off for her next Internet Breaking adventure!

On-Lookers from the Street:

Have you posted about her today?

The End (no pun intended)

I love this piece. Biting social satire, blatant sexuality, and the introduction of a new super hero. I am to be commended. Okay, that's it.l