There's One In Every Dorm 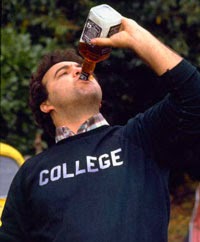 I went to college years ago when dorms and dorm rooms were little better than army barracks but without the tough ass An Officer and a Gentleman type drill sergeant and the requirement that you learn to use a rifle without shooting yourself in the foot.

Nowadays the dorms in which my son and his fellows reside at colleges and universities throughout the country are more like four star hotels, only without concierge service and night time chocolates placed neatly by their beds. Plus today's dorms are co-educational, a development of which I never would have dreamed but for which I would have gladly swapped dozens and dozens of pieces of chocolate and my rifle, were I to have one.

But no matter how dorms may change, some things remain the same.  There are almost always certain types of dorm residents that all of us would recognize, whether we're matriculating millennials today or like me, antiques from the Age of Aquarius.

What follows is a sampling.

There's always one guy in every dorm who:

Yes, this seemed impressive back in the day but it's somehow less so today when the same guy does it for you just before performing your open heart surgery.


.... claims he never masturbates.
One can only hope he was lying.  Because if not, you and I have no willpower whatsoever!


....  claims he routinely stays up all night before a 30 page term paper is due,  types it all out in one draft (in the typewriter era),  and always gets an "A."
Predictably, most of these people are murdered before they reach age 21.


....  claims he never studies, parties the night before tests, and always gets an "A."
Double homicide anyone?


.... never fails to wax poetic on any occasion, littering his everyday conversation with references to Shakespeare, Keats, James Joyce, Film Noir, Classical vs. Modern Art, and any other conceivable subject or reference which displays his depth, sensitivity, and profound love and appreciation for art in whatever form it may be found or prove to exist.
He's only doing it to try to pot naive freshman girls.  It rarely works.


.... claims no matter how drunk or how stoned he is he can drive perfectly well, so c'mon, don't be a baby, climb in the car with him.
And true to form, this is the guy who got you home from innumerable parties and on occasion even drove you from Philadelphia to Boston and back.  And now years later as you pause to reflect on it, what comes to mind is

.... is  goofy and weird-looking but who because he is kind of character quickly becomes a favorite of everyone in the dorm who uniformly call him something like "Lapdog," "Joe Bluster," or "the Funkman."
Yes, Lapdog has an incredible God-given ability to be as popular as a cool guy without actually being one.  Sometimes you almost wish you could be  goofier and weirder-looking and maybe you'd be as popular as Joe Bluster or the Funkman.


.... has a girlfriend with whom he's been going steady since the seventh grade whose pictures grace every square inch of  his dorm room and to whom he glowingly and lovingly tells one and all he will be wed just as soon as the two of them are both out of college.

Ten or fifteen years later this guy generally comes out as gay.


.... is extremely talented on the guitar and never hesitates to whip it out to serenade the dorm with any one or more of his dozens of original songs.
And after a semester or two, you finally master the art of planting a smile on your face, rhythmically tapping your feet, and swaying to and fro to the worst goddamn music you've ever heard in your life.


.... at the end of a social evening always combs through the ashtrays  to scoop up any remaining roaches.
Yeah, you're right.  That was me.

So, did I forget any other guys that there's always one of in every dorm?

When you mentioned perfect hair, I immediately thought of Ron Burgundy. My favorite part of this post was the radical leftists going to work for Fox News. I guess a leopard can changes its spots after all. I wondered why there were no roaches in the ashtrays--you beat me to 'em, damn it.

Yep, that's why. And I'm glad to learn I didn't miss a single one.