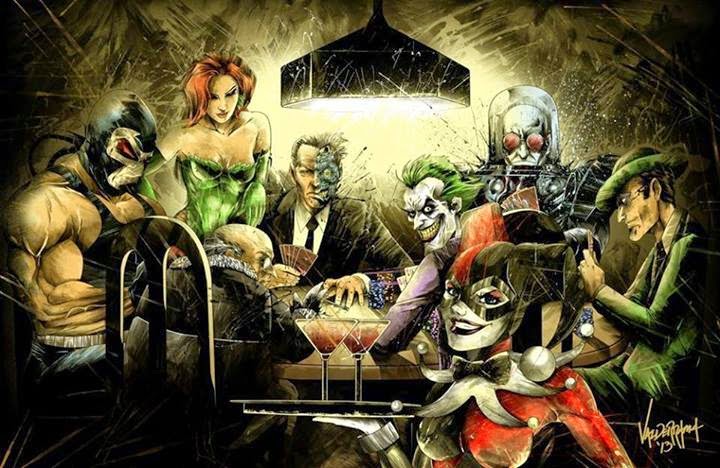 Bane: Greetings and welcome, my fiends!

I'd like to call to order the monthly Board of Directors meeting of the League of Arch Villains Who Think Batman Sucks.  I'm your chairperson, Bane.

With us today are five longstanding Board members:  the Joker, Two-Face,  Ra's al Ghul, the Riddler, and the Penguin.  A no-show again for the fourth month is Selena Kyle.  I sure hope she hasn't turned on us because I have a DVD of Les Miz at home and that chick always make me cry.

Joker: Me too.  Don't get me started!

Bane:  Now, gentlemen,  we decided  that today would be a brain-storming session on the subject of Batman's secret identity.  The topic was suggested by Two-Face, who has some very interesting thoughts to share with us.  Two?

Two-Face:  Thanks, Bane.  It occurred to me the other day that Batman in his everyday life probably makes a pretty good buck.  Well above the minimum wage.

Two-Face: Where d0 all those gadgets come from?  The car,  the hover craft, the motorcycles, that totally unnecessary flare with the Bat logo in the last movie?  You can't get 'em at Goodwill!

Penguin: True. Bet he has a decent benefits package too. Wonder where he works.

Two-Face:  No, Penguin, I don't think Batman works anywhere!  Let's say the Dark Knight has a job selling lingerie at Target,  and one day one of us decides to destroy Gotham City. Can't you just hear him:

"I know the Bat Signal's been shining for half an hour, Commissioner Gordon, but I don't get off work until 10:00!  And my supervisor's been riding my ass hard all day!"

Two-Face:  No, he doesn't work for Sam's Club, you moron!  He's a multi-millionaire!

All:  Ohhh!  Never thought of that.

Two-Face: So who has some suggestions as to who he might be?

Joker:  I was thinking maybe the Koch Brothers.  One of them could be out there as Batman while the other lobbies the hard-core Republicans, then they could switch off.  Very efficient!

Bane:   Are you kidding?

Joker:  What do you mean?

Bane: Those two guys are way more evil than we are!  The Koch Brothers are about as likely to be Batman as they are to be lunching this week with Dr. Cornel West.

Ra's al Ghul:   I think I just heard the sound of ten thousand Jewish grandmothers kvelling!  But could Batman really be Jewish?

Riddler: He looks to me like the kind of Jewish guy who can't stand the sight of blood.  So, no.

Joker:  How about Donald Trump?

Bane:   Joker!   Much as we all hate the Dark Knight,  Batman cannot be the world's biggest asshole!

Penguin: Say, what about Bruce Wayne?

Joker:  Bruce Wayne? He's an idiot!  He burned down the family mansion and didn't even notice when his girlfriend morphed from looking like Katie Holmes to Maggie Gyllenhaal!

Penguin: Too bad, because he's the only multi-millionaire living in Gotham, his parents' murder could have sparked a life-long battle against injustice, and he spent years in the Himalayas studying the deadliest and most secretive form of martial arts in existence.

Ra's al Ghul:  We all know Oprah can do anything.  No doubt she can save Gotham from any one of us, look absolutely stunning in the doing, and still be home in time for dinner with Stedman.

Bane:  Oprah it is!  Now who's up next to destroy Gotham City?

Bane: Great!  I'm marking it in my book.  Penguin, you are assigned to approach Oprah and tell her we will expose her secret if she dare oppose us.

Bane: Not that secret!

Penguin:  I'll do it!  I'll do it on behalf of Arch Villains Who Think Batman Sucks everywhere!

Bane: Get me an autograph.

Yeah, but Oprah gonna squash him!

I want an autograph too and while you're see if she's still passing out new cars. Personally, I would have guessed Ellen DeGeneres, but I'm not sure she could handle any gadget that doesn't vibrate.

You're a mean man, Russell, however I gave some thought to Ellen as well. Then I realized she couldn't possibly have any interest in the Dark Knight rising. There --- now I'm meaner than you!