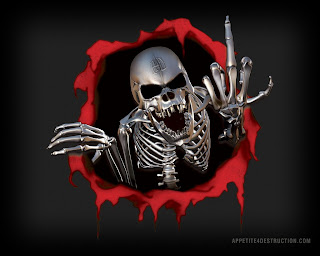 Lex Luther
Woot!  I am not a morning villain!  Up half the night trying to think of a way to kill Superman. Any suggestions?

Ernst Stavro Blofeld    How about constructing a giant Kryptonite Ray? Ever tried that?

Lex Luther     Only about 50 billion times, asshole!  How about something original?

Ernst Stavro Blofeld     Well, I haven't had my coffee yet .... Wait, I know! Kidnap Lois Lane and don't let  her go until Superman does your bidding!

Khan How did you get in here, Shatner?

George Takei  You should know by now, Khan.  He's everywhere!

Ernst Stavro Blofeld
My little tabby Ernestine posing with Roger Moore as James Bond just               before he single-handedly destroyed the fourth or fifth of my nuclear                 facilities geared to take over the world.  Isn't she a cutey-wootey! 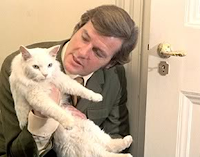 Emperor Palpatine    What an adorable doll-baby!

Lex Luther    Love her to death!

Voldemort  Personally I've always felt Moore was a bit too jovial & light weight in the  role; Connery was the quintessential Bond.  But what a cutikins!

Bane
In retrospect, do you think maybe I should have left a guard in that Middle Eastern prison to watch Bruce Wayne?

Richard III
Now is the Winter of our Discontent at these further changes to Malveo! Hate, hate, hate all the ads on right side of the screen! And I already have myself a chiropractor, thank you!

Lex Luther Damn straight, Dick!   If I wanted to be on Satanist Mingle or Slay Date, I'd be there already!

Bane  Personally I like the ads.  Where else can you find a maniac-friendly hotel in Gotham City?

Professor Moriarty
Anybody got a good recipe for guacamole dip?

bahahaha omg this is too funny!! :D , and george takei having the last word ~_~ brilliant. x

I want to assure my readers (hah!) that this very positive comment was not a setup in any way and that Ms. Martinez and I have no connection whatsoever either through social media or real life.

But I do love her.

I have now made you an official honorary arch villain, Ms. Z. And I'm counting on you to take over England!

fantastic and complete information on your part.

The value-based requirement of an independent social media platform for business is debatable. Celebrities