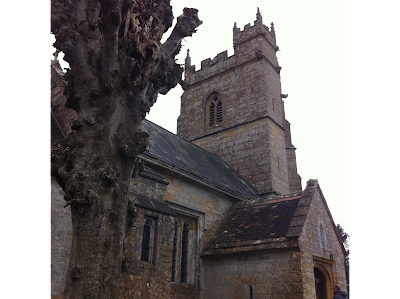 So certain was the network that its upcoming series Knave of Scones would be a ratings blockbuster that no expense was spared in bringing it to the small screen.

Five of the world's foremost medievalists were hired as special consultants, including Sir Ramsay Corningwall of Oxford University.  A full-sized Norman cathedral was built to conform in every detail with precise specifications established by Sir Ramsay. Casting directors took excruciating pains to ensure that only the finest actors who could speak in appropriate accent, tone,  and cadence were cast in even the most minor roles.

Knave of Scones premiered  on September 12, 2013 and was cancelled the next day.

Somebody had forgotten to tell the producer it took place in Omaha, Nebraska.

Okay, so Knave of Scones turned out to be a show about a guy who bakes lousy pastries in the Midwest.  That doesn't mean it wasn't funny!  Anyway, it represents my 123 word story based on the prompt above for this week's Friday Fictioneers.

More takes on the very same prompt from the other Friday Fictioneers are available by clicking here. Some will no doubt transport you back to the days of twelfth century cathedrals and castles and knights and lords and ... or at least back to the days of TV shows that don't get axed after just one episode!

Say, why don't we remake Knave of Scones with Kevin James and a laugh track?

Hi Sir Perry,
Surprised it failed. Game of Scones is a big hit. Scone With the Wind is a classic. Winter's Scone was nominated for an Oscar. Bridgette Scone's diary was very funny. And Black Snake Scone was really sexy. Ron

I don't know. Fox might pick it up if you retooled it a bit. Maybe as Scone Wars!

You, Sir, have a strange wit about you - I love it how we are the same there!
Scott
Mine: http://kindredspirit23.wordpress.com/2013/08/21/friday-fictioneers-ff-dispelling-the-evening-rated-r-8222013-horrorsuspense/

Just a minor detail - a re-write will sort that out... Nice one Perry.

lol :) but i'd watch anything that features scones!

Omaha (comma) Nebraska. But I don't think it would have saved the series. Scott is right.

Who would guess there are Norman castles in Omaha? A scone-dal in the making. LOL

Now I want a scone...I would definitely have watched Knave of Scones! Great story--your mastery of humor never fails to impress.

I've been through Omaha. There's nothing there that I would want to watch for longer than ten minutes.
You are quite the satirist, darling.

Someone's going to need to do some SERIOUS rewriting of history to pull that one off, Perry!
If you don't mind a little ponder from this old Brit, I wonder if it would have packed more punch to use a place name more apparently English - Cambridge, Mass or Exeter, CA, for example. There's a whole list here: http://en.wikipedia.org/wiki/List_of_places_in_the_United_States_named_after_places_in_England
Just a thought!

God, I hate reality shows, so I am very glad that the Knave of Scones was cancelled so quickly. Fun little tale, Perry!

I heard they were making a sequal called 'Rise of the Scones' but someone opened the oven door and it was cancelled. :)

I guess it was just one scone too many, although I understand SNL is thinking of bringing back "The Sconeheads." Thanks for your funny comment, Ron!

And here's some tea to top it off! Thanks.

And Fox News might pick it up if we retooled it as "Obama Responsible for Failed Scone Wars!"

Thank you, kind sir. Now let's find us a couple of fair maidens!

Right, and we can use the castle as a theme park somewhere outside of Omaha. Thanks!

Wow, you're a television programmmer's dream!

Well, maybe this is another Omaha Nebraska that existed in medieval England?
Nah, I screwed up. I'll fix it.

A scone-dal not to look a-sconce at! Nah, didn't really work.

The whole thing blew my mind; I spent six months learning that accent and only got one night to see my face on that small screen. Ha, great story

I know a knave who lives in Omaha. In fact, he is coming to Arkansas next week. I'll ask him to bring us some scones.

Thank you, but I'm afraid for most people it never fails to depress.

I didn't mean to offend anyone from Omaha, I just wanted to use a location that was as far away from medieval Europe as you can get. Actually I was hoping you and I could retire there, darling!

I actually did think about that, but I opted for something that sounded so middle America it was unmistakably wrong for a medieval church. But I can't wait to follow up on those locations, and maybe scout them for future stories!

Don't relax yet. "The Bachelor meets the Knave of Scones" is coming up next week.

Ha! I like that. At least the only cost they had to cover was the oven and the baking dish.

Not so unlikely considering Ben Afflect was all signed up to play King Bruce of Scones!

And people said your face was the best part of the whole show!

And then make sure and tell him he's fired!

Was that a cathedral?, I could have sworn it was a bakery...

All this talk about scones is making me hungry. They could have surrounded it with a cornfield, right? Pesky ratings, all that hard work for nothing.

That was cute. I didn't know there were castles anywhere in the US. I guess I don't get out much.

You're right, it is a bakery. They bake Canter-bury muffins! (Boy, no wonder I'm not popular...)

And personally I loved the show, though the cathedral was miscast.

Sure there are! Just come to Omaha Nebraska. Thanks, Shirley.