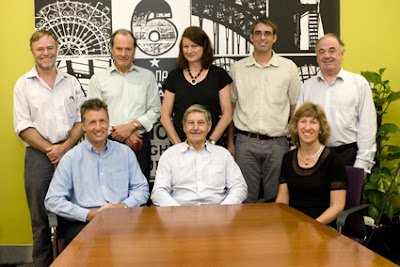 Dr. Lewitzky (center front) and his team;
Have they discovered the biggest douche on Earth?

News Item --- If you live long enough, you'll find out something that stops you in your tracks, curls your hair (even if you don't have any), and makes you question your sanity.  Such was the case this past week when a team of researchers from the University of Havertown PA discovered a blogger living just outside Philadelphia who has earned no renown whatsoever, not made millions of dollars,  and barely even gotten any women!

"The discovery of  the dismally unpopular blog Perry Block- Nouveau Old, Formerly Cute and its author Perry Block ranks with that of the first cave paintings found in France," said Dr. Lance Lewitsky, head of the research team in presenting his findings last Thursday in Las Vegas before the annual convention of the International Association of Bloggers with Castles in Spain.

"The only three things thought to be certain in this world were death, taxes, and fame and riches for blog writers," continued Dr. Lewitsky.  "The existence of Perry Block throws that all out the window!"

Studies have repeatedly shown that bloggers become famous and earn millions of dollars within the first six months of starting a blog. The only exception  prior to the discovery of the woeful Mr. Block is that of  Myrtle Crosshair of Sibly, North Dakota who began a blog in early 2011 dedicated to her love of belly button lint and by year's end had earned only about $600,000 and appeared multiple times only on Leno!   However, that was largely because Letterman and Kimmel hadn't yet gone to the popular "All Blogger" guest format commonplace on most TV talk shows these days.

"But this Perry Block guy," reiterated Dr. Lewitsky, "has been writing a humor blog for almost four years and has virtually no readers, hasn't made a dime, and has only nailed six or seven women based on the blog, only three of which could be reasonably described as smoking hot!"

Professor Lewitsky contends that  Mr. Block may be the biggest douche living on the planet. Ironically, fame may yet come to Mr. Block as a TV movie ridiculing him is said to be in the works, and the difficult search is on for an untalented and goofy-looking actor to play the loser.

For his part,  Mr. Block could  not be reached for  comment and is said to be in seclusion. And who could blame him?

This was my attempt to poke fun at (1) the premise that people get rich and famous through blog writing and (2) myself, in an Onion style article.

Yes, it is a rousing success. No, nobody read it. One out of two ain't bad.

I wonder how big of a grant they got for that study? They could have hired me to come to the same conclusion for a fraction of the money.

This is one contest where I'm happy to finish 2nd. Maybe they can feature both of us in the sequel and call it "Lame and Lamer."

Finished second? The study indicated your blog value at just under 3.7 million were you to sell today. Of course, I know it's your baby!

I just don't understand how I could miss out on such a sure thing. Maybe I need another font?