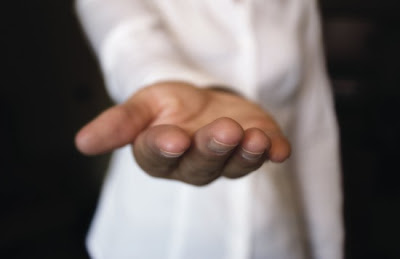 They're four simple words you've heard many times. You're in a restaurant, hotel, or theater and you've got something in your hand you wish to dispose of. It might be:

1) Leftover wrappings from the Big Mac and fries you just stuffed your face with.

2) Paper towels you used to wipe up a gazpacho soup spill.

3)  A tissue you just blew your nose in.

And so you ask the waiter, cashier, hotel clerk, or usher a simple question:

"Where is your trash can?"

You are sincere. You're willing to dispose of your refuse, and why not? It's your trash, and you’re responsible for its demise.

But instead of directing you to the nearest trash can, the service person utters those four special words, outstretches their hand, and willingly receives it.

Even if the refuse is glowing and pulsating, they never ask you what it is, never put on a pharmaceutical glove, and never even pause for a moment of prayer or supplication.

Why would any sentient being do such a thing?

·     Do students at hospitality schools have to pass a course called "Taking That, Sir 101?"

Does the course also include self-treatment for fungal infection?

Is the possibility of sterilization considered an occupational hazard if you want to work at Wendy's?

I was eating at a local restaurant and I got up to throw out my barbecued sauce stained paper napkin. Just as I was about to toss it into the trash a waiter ran up to me, got right in face, and said:

“And violate Restaurant Rubbish Removal laws?!  I could be fired!”

I handed the messy napkin back to him.

“And you could go to prison!”

But those who speak them provide invaluable protection for us all - physical, environmental, and apparently legal as well.

So here's to the unsung heroes of the food and hospitality service industries, whoever and wherever they may be.

May they “take that, sir” forever more!

(Maybe we ought to chip in and buy them some hand sanitizer?)

As nature abhors a vacuum, I abhor posts with no comments so I'll post one. Hopefully the world heeds my warning and service people at least begin wearing rubber gloves when they "take it, sir."

Or you stop blowing your damn nose without a handkerchief!