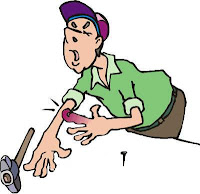 “Going to college, big guy!” I said to Brandon the other day. “It’s going to be a bit traumatic, I’m afraid.”

“Oh, Dad, don't worry!  I’ll be coming soon for the holidays before you know it!”

“No, now I'm talking about the moving itself.  How are two klutzes like us going to handle it?”

It’s true.  In the best traditions of the Jewish people, both Brandon and I are about as handy as a pair of silk gloves at an engine tune up.  I get nauseous turning  a screwdriver, and Brandon for the life of him can't figure out why the central protagonist in the Hanukkah story Judah Macabee is called the Hammer since few Jews have ever seen one.

Together we are the most unlikely father/son duo to have a shop in the basement since Prince William and the Royal Baby.

“Dad,  most people don’t hire movers when they go to college.”

“Yes, but most people are able to put batteries in a flashlight without electrocution risk!”

I dug out an old tool kit of random tools in the basement and tried to scope them out as best I could. I was pleased that I readily comprehended the pair of pliers and the wrench until I realized  that a pair of pliers and a wrench are not normally made out of red plastic, over a foot and a half long, and embossed with the name "Hasbro."

Now these tools would have been easy to work; the others were all small and silvery and depressing.

“True, but how many Jews require a schematic to put on a tallis!”

And of course there will be lots and lots of packing, lifting, positioning, and repositioning, all of which is difficult for someone who’s wholly unable to fit his underwear in a suitcase without having to bump his shoes until the next trip.

eHow will I ever figure out at what angle to pack the desk so it won’t scratch the bureau and smash the mirror --- as if I don’t have enough bad luck! How will I help carry the bookcase without mangling half a dozen toes? That's counting both my toes and Brandon's.

But all is not lost.

“I hope so, “I responded weakly.

“Turns out my roommate isn't Jewish!  Odds are all we'll have to do is get to school and we’re home free!”

Looks like I’ll only need the big red pliers for the packing up.

Couldn't stop laughing!!! I hope that doesn't mean I'm anti-semetic!!! I think it just means I'm pro-Perry!!! (and not the Rick variety)!!!

Love ya, Anonymous! Whoever you are.

I was the youngest of four. My parents were pros by the time I moved out.

Put my stuff in the car, drive me there, help me move stuff into room, goodbye zebra, hello child-free life!

Not looking for child-free life, Ms. Zebra. I am exaggerating here about effects of moving because Brandon is moving into dorm-room but the result is the same: Perry alone come fall.

What happens next? We'll see.

I wanted to thank you for this excellent read!! I definitely loved every little bit of it. I have you bookmarked your site to check out the new stuff you post. Senior Movers