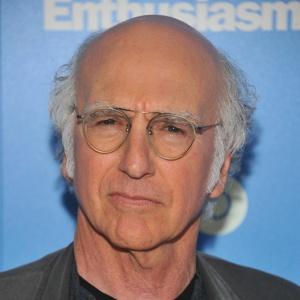 My two year absence?  No good?

When last we saw Larry David on Curb Your Enthusiasm several years ago he was wandering the streets of Paris with good friend Leon. Even in another language, Larry's famous social maladroitness was tres magnifique! And then the scene faded out and Larry David faded away.

And since then, I've been desperately seeking Larry!

Larry David as depicted in Curb Your Enthusiasm is a Jewish gift to the world. He is a rich, successful guy who screws up worse than we do.  And watching him make a bigger idiot out of himself than we ever could makes us feel lots better about ourselves!

What about watching some other comedies, you ask?  That would be fine were there Two and a Half Larrys, Saturday Night Larry, or America's Got Larry.  But no such shows exist, leaving me --- you guessed it --- desperately seeking Larry.

So how about you, friend?  Are you too desperately seeking Larry?
Top Ten Signs You Are Desperately Seeking Larry

2) Seriously considering naming your next child "Marty Funkhouser" or at the least nicknaming him "The Funk."

3) Just launched a drive to have Larry replace Ben Affleck as Batman.

4) If only you didn't have such a thick bushy head of hair!

5) Hum the theme to Curb so incessantly you are being sued for copyright infringement by HBO.

6) Own a black cat so you can pretend it's Richard Lewis.

7) Whenever you suspect someone of lying, you stare at them, tilt your head, the insinuating Curb music plays, and before long you know you're the fucking liar!

8) You've retained Jeff Green as your agent even though you're unemployed.

9) You refuse to respond to actress Cheryl Hines' constant begging for hot sex because how dare she dump Larry!?

10) So what did you think of this top ten list? Oh. Even the Seinfeld finale was better?

And so, Larry David, here we all are, each of us awaiting your return.  Please hurry back so we need desperately seek you no longer.

You see, you're our social safety net.

Without you around, whenever we mess up, we mess up alone.

I hope you find him soon. I hate seeing you in such a desperate funk.

Well, I'm used to screwing up on my own as well. Thanks, Russell!

I wonder, does Larry have IBS too?

Another reason we must seek him out! Thanks for writing.