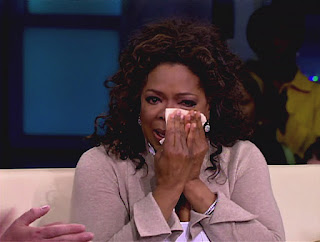 It's a bombshell of proportions as broad, wide, and far-reaching as the person delivering it once physically and proportionally was!

Saying her "mythic, perfect story" was "one big lie," Oprah Winfrey has admitted that she cheated during most of her famed television talk show career, bullied people who dared to tell the truth, and is now sorry about it all --- especially the "being caught" part.

"Got me, y'all!" Oprah told Oprah in the exclusive  interview with Oprah which is expected to enable the words "OWN" and "ratings" to appear in the same sentence without setting off a small explosion for the first time since the network's founding in 2011.

Allegations that Ms. Winfrey had used banned substances have been swirling about the popular talk show host ever since viewers started wondering how someone who once seemed to have an unerring sense for successful television could have possibly founded a  TV network as consistently entertaining as spending an evening with Stedman Graham.

In the frank and "no holds barred" interview,  Ms. Winfrey employs all of her famed interviewing skills to expose Ms. Winfrey once and for all as the noble self-sacrificing individual she has always been whose actions have been motivated exclusively by her fervent desire to entertain and uplift the American public.  Despite this, there are some who believe Ms. Winfrey granted the interview to Ms. Winfrey solely for the cynical  purpose of seeking quick self-serving forgiveness from the American public.

"I have far too much respect for Oprah Winfrey to do anything that!" replied Ms. Winfrey. "From now on, I will do everything in my power to hopefully one day earn back the solid bond of trust I once had with the American people I so love and admire."

"Though it would be good if I could be forgiven before March, folks," Ms. Winfrey added. "I'm announcing a new business venture with former Tour de France winner Lance Armstrong around mid-month and I expect all of you to support it!"

Ah, Perry, I always had my suspicions about that chick...especially the Phil Donahue part. Notice how she threw us off by not losing any weight as a result of her doping...

Thanks for the weekend chuckle!

Not to mention when she sneezes it can clean your entire kitchen!

Thanks for writing, Kathy!

they say confession is good for the soul, I guess it's even better for ratings. Evidently, confessionals are not just for Catholics anymore. I wish you had a network. I'd love to confess right here and now, but we really need some sponsors and a bigger audience to make my story profitable for both of us.

Russell, that's what so good about my blog as a place to confess. You can get what's troubling you off your shoulders and since no one is reading it anyway, your reputation remains unscathed.

Go ahead and spill it, Big Guy!