A Baby Boomer Looks at "Girls" 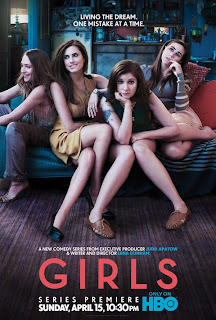 I've always liked looking at girls, but looking at HBO's hit series "Girls,"well, maybe not so much.

Girls, now starting its second season, tells the story of twenty-somethings looking for love and sex and plenty of it in current day NYC. It's supposed to be about all aspects of their lives --- professional, philosophical, spiritual --- but mostly it seems to be about humping.  And the never-ending quest for humping.

The show stars its creator Lena Dunham as main character Hannah Horvath, whose young and single exploits are depicted along with those of her three best girlfriends, Marnie, Jessa, and Shosanna.  Also frequently depicted are Lena Dunham's bare, pointy, and heavily tattooed breasts. Suffice it to say they are not the fodder to launch a thousand ships, or even to launch one very lonely ship on a Saturday night when there's no one else in the dorm.

Millennials and most Gen Xers seem to love Girls.  Boomers, on the other hand,  fall into three categories:

Me? I fall squarely into Category No. 3.

Now it's been suggested  that my objection is rude and offensive because I wouldn't complain if the series star were Scarlett Johansson, which is correct.  I wouldn't complain.  But how many women can honestly say they'd enjoy watching a similarly graphic show about the sexual desires and escapades of the modern American male if the series star were: 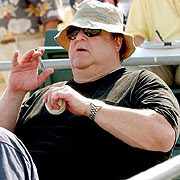 "What is it, best friend forever John?"

"My new girlfriend played by 64 year old Sally Struthers just tweeted me a DM of her  pendulous and unsightly boobs!"

"No big deal, Roger.  It could have been much worse."

"How could it have been worse?!"

"They could have cast Roseanne in the part."

"Why, I'm taking off my pants, sifting through my pounds of rolling fat, and producing my penis for the American viewing audience."

"I'm taking a picture of my dick and tweeting it back to Sally Struthers. Plus I'm texting it to all my friends and business associates and putting it on Facebook, Pinterest, and LinkedIn!  It's likely to become a meme of vast cultural importance!"

"Geez! And we haven't even had the opening of the show yet.''

Whether or not Sixty Year Old Guys ever makes it on air, I plan to keep on watching Girls at least for a while.  For one, I am a Boomer who so strives to be hip that I'll  claim to like anything that's au courant.

For another, the show may just grow on me. I'll give it a couple of weeks.

And maybe, one can only hope, Scarlett Johansson will  be guesting one of those  weeks!

Back in the old days (not always good ol' days), men and women who wanted to hump all the time were referred to as whoremongers and sluts. In the new millineum they get an HBO series. My how times have changed.

They sure have, Russell.

Makes me feel like burning my entire collection of National Geographics from 1962-1967!

So I am curious for I do not get HBO (although here comes the kicker.. Own all the Sex In The City DVDS...lol), is this far more extreme than Sex In The City?

With the above said, I like a bit of sex in my reads and sometimes movies. However, if that is all the content is then I am sure I would find myself bored.

Yes, the show's graphic and too much so for my tastes, Eri. But then I'm a Boomer who thought he'd died and gone to heaven the first time he caught a glimpse of a single bare boob in a movie in 1967.

Whether or not the show's actually any good, I'll save for another post!