No One Else to Play Them 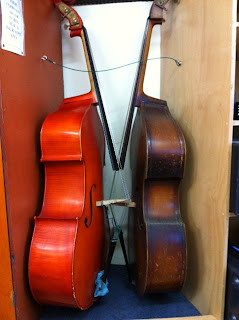 As a child he had become so enamored of music that he had them both made especially for him.  And there was no one else to play them.

He played them in high school, college, and local community symphony too.  He played them for friends, neighbors, and almost anyone he knew.  But as grown-up responsibilities took over, he played them less and less until one day in a back closet he simply put them away.  And there was no one else to play them.

Over the years, he looked at them sadly.  If only he could find the time, but he never did.  And there was no else to play them.

One day he passed away.  The obituary said "World's Tallest Man Dies."

His set of seven foot tall violins would be donated to a museum, the article said, because there is no one else to play them.

Picture prompt above, story below, 148 words .... that's the sound of this man working on the Fabulous Friday Fictioneers and Benevolent Chain Gang this week of January 11, 2013.

Yep, the words are high at 148  --- well above the prescribed 100 --- but maybe that's what's required for a short story about the world's tallest man.

Anyway, that's my tall story and I'm sticking to it.    I'll try to measure up next week.

I like your take on the prompt. Well done!

The repetition on this was quite moving, Perry. Very nicely done, a mixture of pathos and humour.

I didn't see that one coming. Very nice. Sad, but true how so many of us put away the things we love for daily responsibilities.

Sad at the end, Perry. There really was no one else to play them. There's a kind of sadness, but maybe he enjoyed playing them at some point while he lived.

Hi Perry,
A really good "tall tale." Really reaches new heights. You built it up and topped it off nicely. You seem to be able to find levity in almost any topic. Ron

Perry, this story gives me a heightened sense of appreciation for your work!

Dear Perry,
I think this is one of your best. Poignant.
shalom,
Rochelle

didn't expect that ending :) a twist and then another twist^^

Hahahahaha! Irononic and SO true. Nailed it, Perry! Good work!

Maybe Rich's MC could have given it a go ;-) Great tale, even if it grew a little too far. Hope my son doesn't grow this far, though it's looking a bit worrying at the moment.

Excellent story, Perry. Was not expecting that. I liked the part about 'finding the time'... I have a lot of those things I've planned to do, but never will.

Great story with a twist. Wonder, was the name Tiny maybe?

Thanks, Mary. I sure appreciate your not very contrary take on the post.

Yes, it was a nice mixture but darn it, I forgot to put in the oil and vanilla. Knew the pathos and humor didn't taste quite right!

You're with Sandra? Well, I'm with child!

I have no idea what that means.

Frankly I didn't see that one coming either. Sometimes when you're stuck for an ending ...

I trust he loved playing them while he lived, and that no one else played them like he did, thereby establishing the dual meaning of the phrase.

Oy, I am sad now. Glad your story was upbeat!

Four tall jokes there, Ron, and every one of them worked. You are living proof that size matters!

What a guy, and thanks for writing!

A bittersweet tale and a unique take on the prompt. I liked the use of repetition to underscore the theme. Well done, sir.

A good take on this theme. I liked it very much.

Perry,
I read this the other day and wanted to comment but life gets in the way sometimes. This is one of your best...I forgot that you were going to hit me with a punch line. There was nothing forced about this...You had me going and feeling for this man. Well done!
Tom

Enjoyed the story. It caught me off-guard; I love that.
Scott
Mine: http://kindredspirit23.wordpress.com/2013/01/13/cliches-friday-fictioneers-late/

Thanks! Hopefully it doesn't take a nose dive next week.

Yes, I always strive for poignant. Once I look up what it means, that is.

That's nothing. There's another twist at the end of this note to you!

Not really, that's the twist.

Thanks! Donna Manners would be proud, I hope.

"no one else to play them" great foreshadowing for when we finally learned the truth. this was good.

Don't worry, I'm positive your son won't grow this much.

I'm pretty sure, though, that your daughter will! Thanks for writing, Anne.

Thanks, Ted. Yes, like I plan to write back to all these comments, but don't get to them until the spring.

Thanks, Doug. Yes, when I have no fresh ideas I always go for repetition. Works wonders!

Thanks, Sandra. Glad you liked it.

As for me, though, I'm kind of sick of it already!

Nothing forced about it? Oh no, then I have failed!

Caught you off guard, eh?

Next time, I'll remember to lift your wallet while doing it!

Actually I wasn't foreshadowing so much as trying to figure out what the heck those two instruments actually were!

Isn't it sad how life gets in the way sometimes?
Well done, Sir.

Thank you! Isn't it sad how life gets in the way of our writing too?