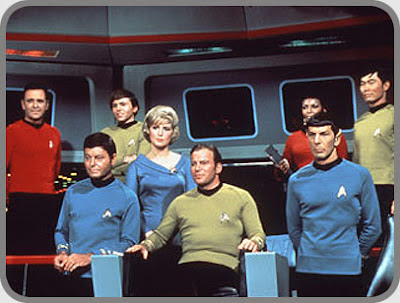 Voice of Glotz --- An Alien

*At this performance the role of Lt. Uhura will be played by Lisa Lynch aka @StarTrekWreck

Kirk:  Space, the final frontier. These are the voyages of the Starship Enterprise Value, its five year mission to explore strange new worlds, to seek out new life and civilizations to which to sell Star Trek action figures, Vulcan ears, and cheap memorabilia of every kind and description a/k/a drek, to boldly go where no shameless huckster has gone before."

Kirk: (voiceover) Captain’s Log Star Date the 37th of Bleen, 2476.  It is becoming quite alarming to all of us on the Starship Enterprise Value that it has been over six months since we last encountered a civilization anywhere in the universe that hasn't already become sick to the point of nauseation from the endless Star Trek drek we've been peddling throughout the cosmos.

If we don’t find a suitable planet of live gullible prospects soon, we will all face the end of our special mission, bitter unemployment, and the desperate prospect of two or three extra seasons of T. J. Hooker!

Scene shifts to inside of Starship Enterprise Value

Sulu: No planet in sight. Captain.

Sulu: Captain?  Do you think I’ll ever get back to  my Facebook account? I was getting very popular with the Romulans, Cardassians, and Kardashians.

Spock:  (entering, with Bones) Did you call for me, Captain?  It is logical since I am half Vulcan and half Jewish.  (Making Vulcan hand signal.) Live long and prosper, and never shop retail!

Bones: Quiet, Spock. (Sensing Kirk’s despair) Jim, Jim, you’ve got to snap out of it!  We'll find a suitable planet of untapped Trekkies, I'm sure of it!

Kirk: (bitter)  You think so?  Why such optimism from someone in your profession, Bones?  Health care hasn't been much of a career ever since all infectious diseases were wiped out years ago by Dr. Snooki Polizzi.

Bones: Jim, I’ve never seen you so negative!  Spock, can you do anything with him?

Spock:  Actually, doctor, I’ve run a probability check.  It is more logical that we will encounter a planet where sane and reasonable phaser control has been implemented than one that hasn't already become saturated with Montgomery Scott Lunchboxes.

Bones:  (Disgusted with Spock’s coolness) Spock, as always, all the sensitivity and warmth  of Federation President Mitt Romney XXIV!

Kirk:  As long as there’s no conflict of interest with your primary work on the Starship Enterprise Value.  What would you be doing?

Uhura: Selling secrets to the Klingons.

Spock: I’m not sure, Lieutenant, but it may have something to do with his recent realization that for years he has had a dead tribble atop his head.

Sulu:  (breaking in) Captain, look up ahead. A planet!!

Sulu: (reading from the screen before him) Life forms, Captain.  Straight, gay, and….wow!!    Beam me down, Scotty!

Kirk:  Forget that, Mr. Sulu! What’s important is:  Do they have Captain Kathryn Janeway Blow-Up Dolls?

Sulu: I don’t have a “Blow-Up Doll” read out, Captain.  But we are receiving a transmission from the planet!

Glotz: Welcome Starship Enterprise Value!  I am Commander Glotz of the Planet Bilge.

Kirk:  Greetings, Glotz!  We come in peace to bring you a mind-numbing barrage of Star Trek memorabilia to enrich your lives and empty your pocket books.

Glotz:  Sorry, Captain, we've had it up to the gills with all that stuff.  And we actually do have gills to have it up to here with too!

Spock: Doctor, I think this might be a logical time for me to hold the Captain, while you hit him with a considerable dose of Brain Viagra.

Spock and Bones grapple with the distraught Kirk as they try to administer the Brain Viagra.

Kirk: (brightening up) Bones, Spock ... did I hear what I think I did?

Glotz:  Wait a minute, Captain!   Did you say Star Trek, not Star Wars?  We've been hanging for this day!   Do you have the authentic  Pavel Chekov Comb-Over Kit?

Kirk:  (Back to his former self,  praise Roddenberry!)  That and a whole lot more!

Spock:  It is now logical to assume, Captain, that we’ll be dispensing Star Trek drek for many years to come.  All of which makes me want to dance the hora!   In a dispassionate  and lifeless manner of course.

Sulu: Set a course for the planet Bilge, Captain?

Kirk:  Yes, Mr. Sulu,  steady as she goes. Our five year mission continues! Our cause is just, our inventory full, and the fees for all merchandise well, we’re not exactly talking Priceline.com!

You can buy the CD cheap if you'd like! 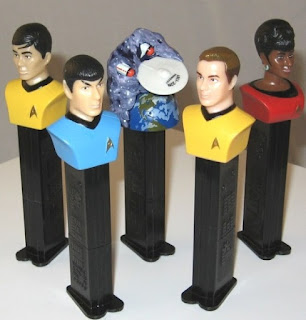 This is perfect! Especially since everyone I meet always tells me, "Gee, has anyone ever told you you look just like Nichelle Nichols?" Also, I lie a lot.

Has anyone ever told you you act just like Nichelle Nichols? A brilliant performance, Lisa! You have done the Captain and crew proud.

And thanks for playing our game and joining the "Nouveau Old, Formerly Cute" Blog where, as you see, Star Trek dreams really do come true!

Yeah, right. Like my Star Trek dream of doing Dr. Beverly Crusher is ever gonna happen ....

Ha! It's even better. I haven't mentioned, but you've done a great job capturing Bill's Shatnerian acting down to a T. I can literally see the scenery being chewed.

Yes, I tried to be true to the acting styles of at least the three principals of the cast, but I'm not sure I fully captured Glotz. He literally does chew scenery!

Thanks again for your inspiration.