Tales of the 47 Percent & Other Divertissements 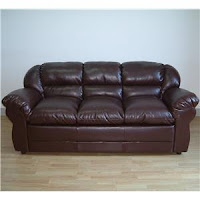 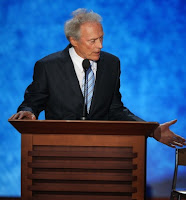 It should come as little surprise to anyone that Clint Eastwood's bizarre appearance before the Republican National Convention a few weeks ago featured a chair.

After all, Mr. Eastwood's obsession with home furnishings has long been known.  He began his career starring in a TV series whose theme song was:

Then he moved on to star in a number of spaghetti westerns playing the role of a mysterious stranger known as The Man with No Lamé  and finally as Detective Harry Callahan uttered one of the most famous catchphrases in all of motion picture history:

Now I don't mean to couch my comments or table any points for discussion but whoever it was furnished the go-ahead for Mr. Eastwood to appear at the RNC?

That guy had to be futon crazy!

Tales of the 47 Percent

Hector:  Hey, Madge, being how youse is up, wouldja get me another eight pound bag of cheese doodles?

Madge:  Yeah, Hector, soon as Keepin' Your Intellect Down with the Kardashians is over.

Hector:  Madge, did the Welfare check come in yet?  I got me the Disability (wink) check and the Food Stamps right here.

Madge:  It's in, Hector, along with the Beaujolais Stamps and the Cocaine Stamps.

Madge:  Say, Hector, didja take care of them picture IDs for us for the election?

Hector:  Of course.  We just gotta vote in this election!  How about that Mitt Romney guy anyway?!!!

Madge: Yeah!  Born with a silver spoon up his butt!

Hector: All he does is spend his days runnin' around makin' boring speeches and changin' his mind about stuff.

Madge: And he acts like he's entitled to be president or something!

Hector:  How can you not love a guy who does nothin' at all and has a humongous sense of entitlement?

Madge:  (serious) One day we really ought to quit being victims, take some personal responsibility, and start to care about our lives.

Madge:  (breaking out in laughter)  No,  of course not, you idiot!

Hector:  (relieved) Race you to the cheese doodles, my girl! 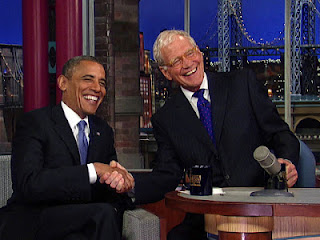 Last week President Barack Obama appeared on The David Letterman Show and while he did well in the interview with Dave, he might have been better advised to bypass the opening Top Ten List.

Did you happen to see it?

10) Because I couldn't trust Biden not to fuck it up!

9) Unlike my opponent, I need the money.

8) So quiet in the world,  not a blessed thing to do tonight.

7) If Clinton went on, I'd have to kiss his ass for another three weeks!

6) Needed to cheer myself up after a good cry with John Boehner.

5) Always wanted to palm Paul Shaffer's head like a basketball.

4) Dave promised me I'd get to meet Clint Eastwood.

3) After the end credits, I get to say "I'm Barack Obama and I approve this stupid TV show!"

And the Number One reason I decided to do The David Letterman Show is:

1) Dreamt of being on Letterman ever since I was a boy in Kenya.  Oooops!