My Tweeting with Larry 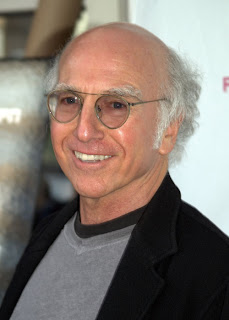 I couldn’t believe my eyes!

I was dumbstruck, totally in awe at what I saw on the computer screen!

Or was I awestruck, totally in dumb at what I saw on the computer screen?  Nah, I’ll go with the first one.

…. flashed the message on my PC screen, complete with the above grinning avatar/picture of the bald Jewish sixty-ish comedy icon with whom I have absolutely nothing in common except, of course, for the icon part.

I wondered how this actually could be. Frankly I’d be thrilled if @Carrottop were following me!

The day that Larry David allegedly followed me on Twitter will forever remain etched in my memory.  And if you've never had your memory etched, boy, you've no idea how much it hurts! It was July 19, 2011, and still I need a Motrin now and then.

When I saw the amazing e-mail notice, I immediately clicked over to the Twitter page of @LarryDavidMVY to check it all out. There atop a handful of tweets was the grinning LD following approximately 70 random twitterers who --- upon closer inspection --- proved for the most part to be a rather motley crew of losers, miscreants, and cretins.

Not ten minutes earlier I had tweeted something about Larry David, and apparently Alleged LD  had chosen to follow those tweeters who had recently cared enough to send their very best. Well, that explained the ragtag raft of followers --- me as well as the guy whose Twitter page was dedicated to the proposition that not only is Barack Obama the Anti-Christ, he’s hopelessly incompetent at it as well.

I quickly typed out:


“Got notice that @LarryDavidMVY is following me. Sure! If this is the real Larry David, it'll be the first time I've ever orgasmed over a man ...”

I wasn't lying.  If the Real Larry David were actually following me on Twitter, not only would I have literally orgasmed over a man, it would have doubtless been the paramount sexual experience of my life,  good for me and good for just about anybody else I've ever met --- including you!

On the other hand, if @LarryDavidMVY was a pimple-strewn social deviant alone in a  room overflowing with pictures of himself dressed as Jabba the Hut photoshopped together with George Lukas, well, then sex with you might even have the edge!

Within a few seconds, Alleged LD tweeted back the following:

... could it be, yes it could … something’s coming something good…


"But you couldn't possibly be Larry David. God isn't that kind to the Jews."

Anybody out there have any idea how to bronze a tweet?

@LarryDavidMVY's tenure's on Twitter didn’t last long, and by August 1 he'd tweeted his last.  So there isn’t any way to know if I was truly tweeting with the Kosher King of Cable Comedy or with Jabba the Hut’s less lithe and lovely cousin.

But most Twitter imposters try to fool you by staying in your face and  imitating the imposteree in an engaging manner.  @LarryDavidMVY vanished from Twitter like a box of Mallomars left unattended in a sorority house and tweeted like he didn't want to get pinned, let alone engaged.

Most people don't know that Real LD answers "Martha, my dear," if you ask his favorite island, yet Alleged LD put "MVY" in his Twittername  and followed a number of tweeters viable only on the vaunted Vineyard.

Of Alleged LD's 22 tweets,  two of them for me were p-r-e-t-t-y p-r-e-t-t-y good!  The other 20 were about as interesting as Martha'sVineyard after a monsoon at midnight.
If @LarryDavidMVY was the work of an imposter, this guy was the lousiest imposter since ABBA attempted to pass themselves off as a musical group, or Hayden Christianson as an actor.

Here's hoping you were the Real Deal.   But whoever you were,  be you genius or goofball,  maven or moron,  icon or idiot ....

Considering how entertaining you were, lucky for you I didn't unfollow your ass!

And, BTW, I chose Cheryl.

Who is Larry David?

And your labels still look the weird side of random to me. How many people are searching Google for 'unfollow your ass'? Perry, it pains me to say it, but I fear you are incorrigibly frivolous.

Lexi,
Yes, I'm still leaving a few goofy ones in, as is my wont. (Hmmm, "wont" would make a nice label.)

But if you look above, "Barack Obama," "Larry David," "Twitter," and "unfollow your ass" all actually tie into previous posts, with "Jabba the Hut," and "Martha My Dear" likely to one day do so also, considering my writing and interests.

So I'm not as incorrigible as you might think, and I owe it all to you.

Larry David is a hugely popular American TV comedy star known as the creator of "Seinfeld" and a current show called "Curb Your Enthusiasm" on HBO. You either love him or hate him and it's very possible to do both at the same time.

Thanks again for being my inspiration in charting "the weird side of random."